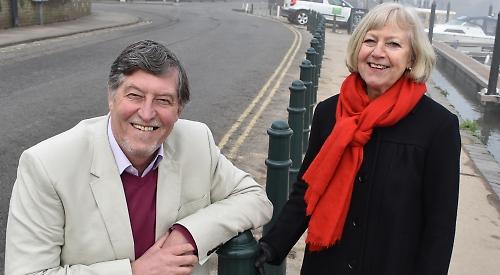 TWO bollards by the Thames in Henley will be repaired after a pick-up truck driver damaged them.

Darren Baker’s Ford Ranger struck a lamppost in Thames Side, went through the two concrete posts on the pavement and plunged into the river.

He was fined and banned from driving following the incident in January.

The bollards were installed in February last year by Oxfordshire County Council, the highways authority.

It will cost £225 to repair and reinstall them.

The town council’s planning committee decided that for aesthetic purposes it would be better to reuse the posts by inserting a sleeve into the bottom and welding it in place as 30cm is required below ground level.

The money will come from the council’s Community Infrastructure Levy funds, which were set aside for professional fees and transport projects.

Last month, Baker appeared at Oxford Magistrates’ Court and admitted refusing to give a urine sample on unreasonable grounds. He was fined £150 and disqualified for a year.

Former mayor Pam Phillips raised the issue of pedestrian safety with the town council, saying she was concerned that lives were being put at risk.

She said that vehicles parked on the stretch of pavement where the bollards had been were so close to the river that it forced people in wheelchairs or with prams to walk in the road.