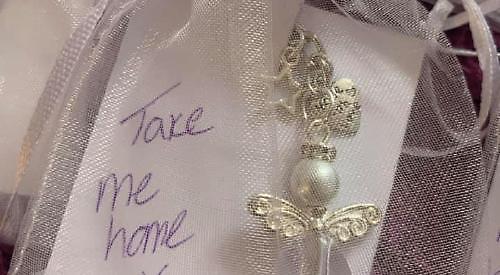 A WOMAN and her two sons have been hiding angel charms around Sonning Common to make the people who find them smile.

The trio have hidden about 35 trinkets around Millennium Green in Kennylands Road, in alleyways and bus stops in the village and plan to hide 50 more.

The small ornaments are made from an assortment of beads to resemble an angel and placed into a clear fabric bag with a note saying “Take me home”.

Lyndsay Higgs, who lives in Rosemary Crescent with Ben, 13 and Sammy, nine, made the gifts during the first lockdown in March last year with the intention of selling them on.

She said: “It was just something to do and I tried to sell them but not a lot of people wanted to spend money during those uncertain and difficult times.

“They were just sat in the drawer so I said to the boys ‘shall we just go and leave them on the benches and trees in Millennium Green?’ and they thought it was a great idea.

“Two ladies followed us as we were putting them in the field wondering what we were doing and one lady took one to send to her daughter-in-law in Devon and the other took one to give to her friend who was just diagnosed with cancer.

“It was a nice thing to do and it has taught the boys a lot about kindness.”

The boys hid 14 charms around Millennium Green and 20 more in alleyways and bus stops around the village.

Miss Higgs, 36, said: “They loved it. They chose where they thought would be best to leave them so people could find them.

“The cards inside were originally blank so we decided to fill them in so people knew they were okay to take and they weren’t lost.”

The family now want to leave 50 more charms around the village after reading the comments left by villagers online.

Claire Austin, who lives in Lea Meadow, posted a photo online after her daughter, Liberty, eight, after she found one of the charms.

She said: “My daughter found it on a bench near The Herb Farm in Peppard Road. She was excited to find it and said it was very kind of someone to make and leave it. Little things like this make the day of children and adults, especially homemade gifts that are so pretty.”

Rebecca Rees-Dunn, who lives in Lea Road, also found a charm with her daughter Amelia, three.

She said: “We found the angel charm hanging from a tree along Peppard Road in Sonning Common. We had been out for a walk and Amelia had chosen to walk that way instead of towards the Millennium Field.

“We have been enjoying trips up to see the tree fairies in Gallowstree Common so on finding the angel charm Amelia thought one of the fairies had left it for her there.

“She didn’t stop talking about the angel charm for days. Finding it made us both smile, as we’ve never come across anything like it before.

“It is such a thoughtful idea, especially during these strange times. I am sure that the lady and her children brightened up many peoples days with her thoughtful little presents.”

Miss Higgs, who is a full-time mum, said the feedback was lovely and it shows the trio have “really cheered people up.”

She added: “The boys also think they are famous now.”

The ornaments take about five minutes each to make and Miss Higgs doesn’t mind the work as it keeps her busy after the loss of her 13-year-old chocolate labrador, Buddy.

She said: “Last year my dog died in October and he used to sit downstairs with me while the boys were in their rooms playing games.

“He was my best friend and it was awful losing him. I had a stillbirth of a baby girl after getting Buddy and he was with me through everything.”

Miss Higgs home-schooled her children when the schools were shut during lockdown which she said was challenging.

“Sammy liked home schooling and wished it could have carried on but Ben struggled without the socialisation and he works better at school.”

During the three lockdowns, the family went cycling and spent more time in the village.

Miss Higgs said: “It was great as there was so much family time and the quicker they got their school work done in the morning the more time we could spend together.”