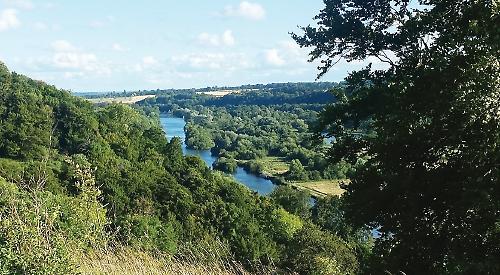 A FARMER in Shiplake has planted 20m of willow hedging alongside the Thames Path in a bid to deter antisocial behaviour.

Stephen Doble was responding to incidents of drunk teenagers jumping on to boats on nearby moorings last summer.

He owns fields that run along the path and lets the moorings to boat sellers Val Wyatt Marine, which is in Wargrave on the opposite bank.

Mr Doble said he had been approached by walkers who felt “intimidated” by large groups of people gathered there and felt something had to be done about it.

He said: “Last summer the boats were damaged by drunk teenagers jumping over them. It was a miracle nobody was hurt.

“The last thing we want is to spoil the view and I would have preferred to do nothing at all but we could not leave the problem as it was.”

Mr Doble consulted with an officer from National Trails, which is responsible for the Thames Path, and came up with the hedging plan after deciding that a fence would be unsightly.

He said: “Once the willows have rooted, we will trim the hedge to maintain the view. We have planted hedging beside the boats and will trim it annually to keep it at shoulder height and time it to maximise the environmental benefit.”

Richard Snowball, of Val Wyatt Marine, said: “We have had some issues last year with antisocial behaviour and rubbish that was left behind and this will break up the towpath a little bit.

“This was an issue not just here as large gatherings of people were happening up and down the River Thames last summer.

“We have tried our best to control our side and Stephen and some residents would also try to clear rubbish from the grass.

“Hopefully these new trees will stop that from happening and will also look nice.”