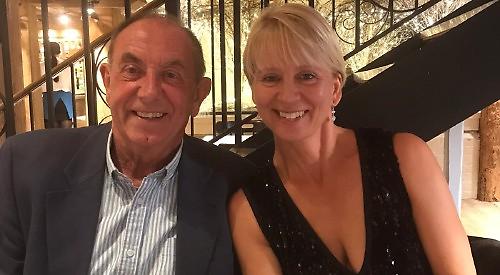 A WOMAN suffered a stroke as she was talking part in charity walking challenge.

Joanne Bell, 52, was more than halfway to completing 1,083 miles — the equivalent distance from Land’s End to John O’Groats — when she was taken to hospital on day 55.

She was at home after a day’s work at the Mill at Sonning theatre, where she works in the box office, when she realised there was something wrong.

“It was totally out of the blue,” said Mrs Bell. “I had just got home from work and my fingertips went numb.

“Then my arm went limp and dropped down, so I had to hold it to get any use out of it. I went into the garden when it happened and was totally shocked.

“I called the ambulance and they were absolutely amazing. I was taken straight to hospital and went on to the stroke ward and received a blood-thinning injection.”

She spent five days at the Royal Berkshire Hospital in Reading under observation.

Mrs Bell said: “I was pacing up and down after the first couple of days and was like a caged animal. My legs were fine but I had to take it easy. It felt strange after so many days of walking to be unable to do anything.”

She regained most of the strength in her right arm and hand by the time she returned home to Caversham Park Village, where she lives with her husband Geoff, 71.

The next day she was back at work and she continued her challenge, completing it in a total of 89 days.

Mrs Bell said: “I’m a determined person and I wasn’t going to let a stroke stop me.

“I took it at a gentle pace afterwards but even my consultant said that exercise was good for you as long as you don’t push yourself too hard.

“It was a big setback to have during the challenge but I feel lucky to have finished it.

“I’m really grateful to the hospital and the staff there. It was just a minor stroke for me, so I feel lucky in a way. I more or less carried on as I was before.” Mrs Bell, who has three daughters, Maria, 24, Ellie, 17, and Georgie, 23, started her walks on January 29 and finished on March 31.

She averaged about 11 miles a day, walking along the Thames Path and around Caversham and Henley, mostly alone but sometimes accompanied by her husband.

Mrs Bell said: “It was a huge achievement and I am very proud of myself and so are my family.”

She was able to return to driving at the end of last month and has been building up the strength in her hand to be able to write properly.

Mrs Bell said: “I would really like to thank Suzie, my occupational therapist, who helped with my exercises. I couldn’t drive and it felt like I had to teach myself how to write again.

“She was amazing and so was Gareth, my aftercare stroke nurse. He would come and take my blood pressure and talk me through what had happened but he was generally just there if I needed him.

“I’ve got 99 per cent of the movement in my hand back and my arm has started to get back to normal over the weeks.

“With the medication, hopefully there will be a low chance of it happening again but nothing is guaranteed.”

Mrs Bell had previously been furloughed from her work at the Mill so she decided to use her time wisely by raising money and awareness for causes she is passionate about.

She raised £95 for the Society for the Protection of Animals Abroa, and £200 for Safe Heaven for Donkeys, a charity that cares for working and abandoned donkeys in Israel.

In October, she completed the virtual London Marathon in aid of animal charities, including Compassion in World Farming, finishing in eight hours and walking as far as Taplow.

Mrs Bell, who has a 12-year-old chorkie called Alfie, said: “I have always loved animals and I know lot of charities are really struggling at the moment because of the pandemic.”

She has stayed active during the last year by taking part in online barre classes, which combine elements of ballet, yoga and Pilates.