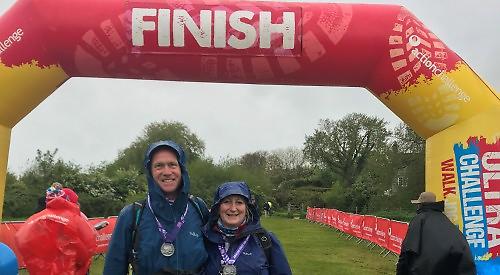 A COUPLE raised nearly £4,000 for the church and parish hall in Remenham by completing a walking challenge along the south coast in terrible weather.

John and Sue Laing were among 2,000 people who took part in this year’s Jurassic Coast Challenge, which follows a 100km route from Corfe Castle to Bridport, in rain and strong winds.

Mr Laing, 59, walked the full distance over a weekend, finishing in 22 hours and 60th out of 324 participants. He met up with his wife at the end of the first day and they completed the second half together, trekking from Weymouth to Asker Meadow after staying in a hotel overnight.

Mrs Laing, 58, said: “We found out later on that a lot of people didn’t finish but it never occurred to us that we might not. We just kept plodding on. I think we were well prepared.

“It was lashing down with rain and although it was exciting getting a medal at the end, I just wanted to get a cup of tea and sit down. I probably got the sense of achievement more the next day.”

Mr Laing said: “It was a great thing to achieve. There were quite a few withdrawals and we saw a pair of walking boots in a bin, so someone had obviously had enough.

“There were 104 people that withdrew from the one I did, so it gives you an idea that it wasn’t exactly a walk in the park.” Mr Laing, the director for a commodity trading firm in London, was accompanied by family friend Greg Mills on the first day.

They walked 58km together before Mr Mills carried on walking through the night alone to complete the 100km in one go.

Mr Laing said: “It was nice to have Greg on the first day because we both walk at the same speed.

“It was only when we got to some of the steep hills where Greg stopped for a bit but I couldn’t do that and just carried on. I wasn’t very quick but I just kept plodding up.

“I think I could have done it all in one go but I don’t think I would have enjoyed it as much. I’m glad I did it in two stages.”

Mrs Laing, a finance director, came 31st out of 84 people who walked only the second half.

She found the walk on Chesil Beach to be the hardest part. She said: “It was over a kilometre of walking on these pebbles. It’s like walking on gravel and your feet keep sinking. I could have sat down and burst into tears but I just kept going.

“We then did a really steep descent and had 2km to finish on tarmac walking through Bridport to get to the end when it was really tipping it down.”

The couple received a much-needed boost when a supportive message came through from one of their neighbours towards the end of the challenge.

Mrs Laing said: “We have a Remenham WhatsApp group that was set up during the pandemic to make sure everyone was okay. One of the people said they were thinking of us and wished us well.

“We were at a rest stop and I managed to tell them that we had done 94km.

“We then had to go up a horrendous hill with a strong gale and there was a flurry of donations at that point. That really spurred us on.”

When they reached the finish line, they received a medal, T-shirt, glass of Prosecco and a burger.

The couple originally set out to raise £1,000 for St Nicholas’s Church, whose income has been badly affected by the coronavirus pandemic.

They have worshipped there regularly since moving to the area 13 years ago and Mr Laing has been a churchwarden for the last seven years.

“It is about a sense of community,” he said. “It is just about doing your bit.”

His wife added: “If you live in a community, you do have a bit of a duty to give back. Hopefully, people who move here will also be minded to join in. If everyone just sat back and did nothing, it would be a very sad community.”

Rev Jeremy Tayler, the rector at St Nicholas’s Church, said: “I’m very pleased. I had a good chat with John when they were coming home.

“It sounds like they were blown about a great deal and it was quite hard going but they did it.

“Financial security for small parish churches is always going to be challenging, even in normal circumstances. John and Sue have taken this on in a very personal way and they have exceeded all expectations.”

Charlotte Every, another churchwarden, was also due to take part in the challenge but she injured her knee a month ago. Instead, she drove the couple home.