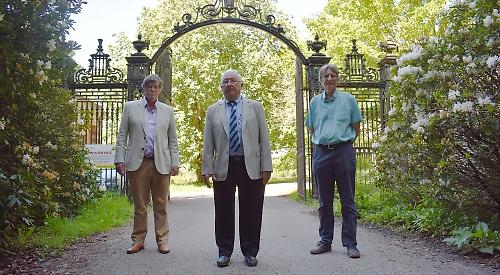 A CAMPAIGN has been launched for a new hospice to be built in the grounds of the former Sue Ryder home in Nettlebed.

The organisers say the charity is about to put the Grade II listed Victorian property on the market for £20 million and a share of this would fund a new hospice with six to 10 beds.

The former inpatient unit at Joyce Grove, which was closed in March last year, had 12 beds before that number was halved in 2019 due to what Sue Ryder called declining demand.

If the charity won’t pay for a new a new hospice directly, the campaigners say it should donate a plot within its 27-acre grounds for another provider to build one.

Alternatively, they could set up a charitable trust to build a new
£12 million hospice elsewhere and Sue Ryder should donate £5 million with the rest of the money coming from grants and fundraising. The campaigners are led by Henley town councillor and former mayor Stefan Gawrysiak and Tony Hardy, who volunteered at Joyce Grove after his son David, from Hare Hatch, died there in 2018.

Before the coronavirus pandemic hit in March last year, Mr Hardy would drive patients from their homes to Joyce Grove to attend day services such as counselling and art therapy.

These have now been moved to Sue Ryder’s new base at Battle Barns in Crowmarsh, where the charity runs a palliative care “hub” offering phone support and home visits, but are taking place virtually until the covid restrictions are fully lifted.

The campaigners say their demands are fair because although Sue Ryder still accepts South Oxfordshire patients at its Duchess of Kent hospice in Reading, they are behind those from Berkshire in order of priority.

The charity announced its agreement with Oxfordshire’s NHS clinical commissioning group, which is responsible for securing hospice provision across the county, following an angry response to the closure of Joyce Grove last year.

But in recent talks with the group, the campaigners were told that just three of the Duchess of Kent’s 15 beds may be used at any time and only if no one else needs them.

The only other inpatient options are Sobell House at Churchill Hospital, near Oxford, or the Thames Hospice, which recently moved to a purpose-built 28-bed unity at Bray.

This week, the commissioning group was announcing plans to open two new beds for South Oxfordshire residents at Wallingford Community Hospital, which could be run by NHS staff with support from Sue Ryder.

It has been exploring the issue since February last year as it accepts there is a “small number” of patients with complex needs for whom inpatient care would be best.

The campaigners have welcomed the move but insist that more beds are needed.

Sue Ryder says it had to leave Nettlebed because it couldn’t afford to operate from an old building not designed for the purpose.

It began moving towards a “hub” model in 2018 after surveys showed more people wanted to die at home and says the service has become increasingly popular.

However, the campaigners say many people still want a hospice bed and should have that choice.

They were due to discuss this with the charity in March last year but the meeting was scrapped because of the looming pandemic.

They says that since then repeated requests for a new meeting date have been ignored but Sue Ryder disputes this.

The campaigners say Sue Ryder is morally bound to share the benefits of any sale because it received the Joyce Grove estate as a gift in 1979. The charity has been granted planning permission by South Oxfordshire District Council to convert the main building into 20 flats.

Councillor Gawrysiak, who is also a member of the district council, said: “We have nothing but praise for the clinical team and the way they’ve kept the outpatient service going through the crisis.

“Patients and families praise it in abundance, too, so our criticisms are directed purely at high-level organisational decisions.

“The Sue Ryder management board and trustees are aloof, remote and not engaging with the community, even though the charity has raised so much money through events like the Henley half-marathon, its own fireworks display and the monthly second-hand sales at the hospice which made about £30,000 each.

“That’s a phenomenal amount and if there’s no longer demand for inpatient care, why did the Thames Hospice recently move to a bigger site? If the need still exists in Berkshire, the same must be true here.

“Sue Ryder has been refusing meetings for more than a year and we only want a chance to explore the options. We’d prefer that they invested money directly in a new hospice but will have to see what they say.”

The campaigners say Sue Ryder should research the exact number of beds needed.

Their own £12 million estimate for a new hospice is based on studying similar projects like the
£16 million redevelopment of Townlands Memorial Hospital in Henley in 2016, which was meant to include a new Sue Ryder bedded unit but the charity pulled out of the deal. Any new facility could have beds named after Nettlebed and other local villages and each community could donate towards “their” bed’s upkeep.

The campaign is supported by fellow Henley town councillor Ian Reissmann, chairman of the Townlands Steering Group, which campaigned for years to save and then rebuild Townlands.

He said: “They say the ‘hub’ is meeting local need but if you force people to use it, it’s bound to appear that way. The outpatient option works for many people but that choice shouldn’t have been taken away.

“At one point Sue Ryder planned to provide eight beds elsewhere and when they backed down because they couldn’t find a location, they said it only affected a ‘couple’ of patients. That’s offensive because eight beds would serve a substantial number over a year.

“It’s not fair to force people who want a bed to choose a less desirable alternative at the hardest time of their life.

“We accept Sue Ryder couldn’t sustainably operate at Nettlebed and aren’t against its disposal as long as any proceeds meet our residents’ needs. The charity is free to manage its estate or move the service to a modern setting but shouldn’t just close it.

“The issues with the Duchess of Kent hospice hasn’t triggered this but it symbolises the ongoing lack of engagement and we’re sounding the alarm against the gradual salami-
slicing of services. These are matters of life and death.”

Cllr Gawrysiak added: “If Sue Ryder reinvests proceeds from the sale into a new bedded unit, I’m convinced the community would pull together with financial and practical support.

“Sadly, there’s a reluctance to support Sue Ryder and it’s in danger of losing money.”

Mr Hardy used to own an international aviation firm which he was planning to hand down to his son before he was diagnosed with cancer.

David, who left a wife and two children, was cared for by a nurse whom Cllr Gawrysiak had taught when he worked at Gillotts School in Henley and she put the two men in touch.

Mr Hardy said: “I was motivated to volunteer by the sympathy and incredible skill which staff at the hospice demonstrated during David’s stay.

“We soon became a big family and I became very attached to the building too. This is about giving something back to the community which they’ve been denied.

“The volunteers feel they’re being treated with contempt because of the poor communication, especially as the second-hand sales used to make so much money.

“We don’t always consider that we might need a hospice until the alarm bell goes but people shouldn’t forget it because the day might come for anybody.

“We mustn’t wait until it’s too late to fight and regret not taking action sooner.”

He said: “They want to take money away from a private charity and use it for public purposes, which is utter nonsense. They ought to respect Sue Ryder’s position and could have taken a more positive approach by helping the charity with its fundraising and other activities.

“Sue Ryder has always argued its case professionally and I don’t see how others can possibly question that. The campaginers have massively misjudged the situation and shouldn’t be trying to second-guess them.

“The commisioning group’s suggestion for a smaller number of beds in another location is interesting but that’s for it to decide whether and how to bring that forward and it doesn’t support the campaigners’ view of the situation.”

Sue Ryder said it had repeatedly offered to meet Cllr Reissmann to discuss the matter, ideally with representatives from the commissioning group.

It said 15 patients from South Oxfordshire were referred to the Duchess of Kent hospice in the year to March 31.

A spokeswoman said: “The future provision of inpatient unit beds for patients in South Oxfordshire is a decision for the Oxfordshire clinical commissioning group, not Sue Ryder.

“It is a consideration for their budget and assessment of local patient needs, although we remain open to discussing any future plans which the commissioning group might like to explore.”

Diane Hedges, chief executive of thje commisioning group, said: “Over the past year, we’ve been working with health partners to find a suitable location for these specialist beds closer to home and reduce the need for travel for patients and their loved ones.”

She said a virtual community meeting would be held to explain these proposals in details and to answer questions and receive feedback.