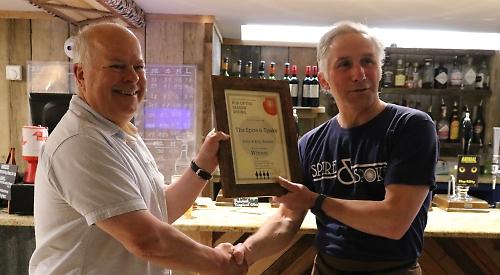 A PUB in Watlington has won an award for its selection of locally brewed beers.

John and Katy Riddell, who run the Spire & Spoke pub in Hill Road, were presented with the pub of the season award for spring by the Campaign for Real Ale.

Graham Hards, chairman of Camra’s South Oxfordshire branch, said: “John and Kate have recently taken over the pub and refurbished it quite significantly.

“They have changed the style and have completely reimagined what it used to be, all in the middle of the first lockdown, so it was a brave thing to do.

“It was a great effort to convert what was a traditional pub into something different. They have created a good community-focused pub building up from basically nothing.

“They offer five beers from local brewers. It is a great example of a pub that does a wonderful job for the community.”

Mr Riddell, who was the landlord of the Fat Fox Inn in Shirburn Street for nine years before opening the Spire & Spoke, said: “It was great to receive the award. I was quite surprised.

“It’s nice to see that the Campaign for Real Ale is recognising pubs that are different from traditional ones.

“They are looking at other ways of selling ales and what a great opportunity for the local brewers to show off their products.”