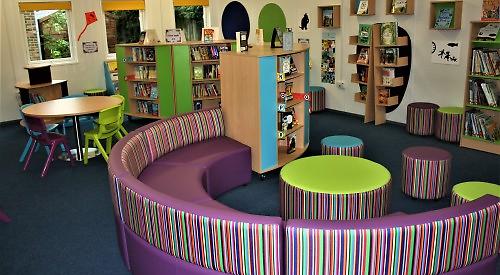 A NEW library has opened at Goring Primary School.

It is in a portable cabin that was previously used as an overflow classroom and cost £17,000.

The parent-teacher association at the Wallingford Road school raised the money with a series of sponsored events, which took place before the coronavirus pandemic began or were held virtually.

The refurbishment work was supposed to finish last year but was delayed because much of it was carried out by volunteers who could only work in small groups to allow social distancing.

The library has about 2,500 books, both fiction and non-fiction, some of which were donated by parents and supporters, as well as sofas, seats, tables and a study area.

It is decorated with a mural of a rainbow made from different coloured book covers and the slogan “read, learn, grow”. There are silhouettes on the walls of famous characters from children’s literature, such as Dr Seuss’s The Cat in the Hat, which were drawn or painted by staff.

The library will be staffed by volunteers, including former teacher Amanda Clegg, who retired in 2019.

Deputy headteacher Hannah Grey said: “This has been in the pipeline for a long time and it’s a shame it took longer than expected but we’re thankful to our wonderful PTA for all the work they’ve put in.

“This temporary classroom was set up to cater for a ‘bulge’ year so it was the ideal location once numbers went back to normal.

“There was a lot of excitement surrounding the opening and parents say they’ve never seen their children so enthused about reading.

“They’re absolutely buzzing about it and racing through books.

“The children were pleasantly surprised by how colourful and comfortable it is. It is a great environment for learning because it’s so welcoming and relaxing.”