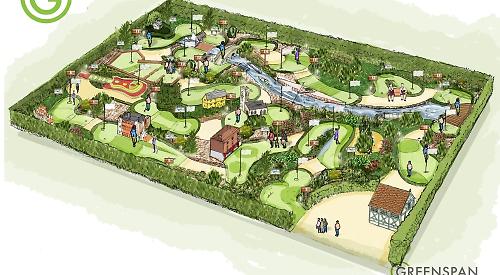 PROPOSALS for an “adventure golf” course in Henley have attracted support following a public consultation.

The town council, which is considering a £270,000 transformation of the putting green at Mill Meadows, says most of the 131 people who responded were in favour of the idea.

Fifty-seven per cent said it provided the “best overall social and financial value for the area” while only 26 per cent disagreed with this.

Some said a splash park was a better idea, which the council has previously dismissed as too expensive to build and maintain.

Others said it should be left as an enclosed green space, possibly with sensory planting or a wildflower area, or reverted to being a putting green.

There were also suggestions for a “green gym”, tennis court, maze, sand pits, a bar, a picnic area or a second bowling green to complement the one at the nearby Leichlingen pavilion.

Forty-eight per cent of respondents said they would definitely use an adventure golf course while 15 per cent said they were likely to do so.

Some said the average entry price of £6 per person could be too expensive so the council could consider discounts for residents. There were also concerns about noise and vandalism.

The results will be discussed at a full meeting of the town council on Tuesday.