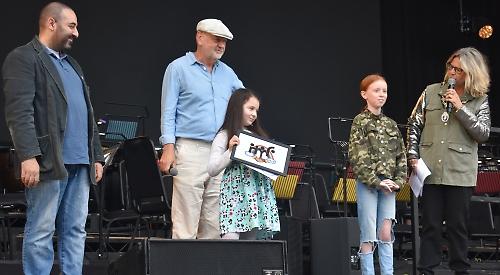 A GIRL has won a competition to design a logo for next year’s Henley Youth Festival after entering just for fun.

Lois Reskalla, eight, from Caversham, said she was “happy and surprised” after discovering her colourful design had been chosen for the event in March, which will have a theme of “friendship”.

She said she thought she would enjoy taking part but hadn’t expected to actually win, adding: “I knew there were older kids than me entering.”

Lois’s design featured a rainbow with boths ends of it in a handshake around the initials “HYF”. It was chosen as the winner by l graphic designer Ben Hargreaves, who then polished it to create the final design that will be used.

Lois, a pupil at Kidmore End Primary School, was presented with a framed copy by Henley Mayor Sarah Miller on the “floating” stage at Henley Festival’s family fun day on Sunday.

Her father Michael, who accompanied her, said: “It’s a really proud moment for me and Lisa as parents to see Lois receive a prize from the Mayor.”

Councillor Miller said: “So many children from schools all around Henley entered and I know it was so difficult to choose the winner.”

Mr Reskalla recalled how just before the summer holidays his daughter had told him she had a good idea for the competition and wanted to enter.

She wanted to use a rainbow — her favourite thing to draw — to represent friendship.

Mr Reskalla said he left her to it until Lois finished her picture and gave it to him to enter, telling him to make sure he did so before the closing date. Lois’s win was mentioned in her class at school, where she is in year 4, and she was given a round of applause and everyone told her “Well done”.

Lois sat in via Zoom as Mr Hargreaves brought her design to life.

Mr Reskalla said: “It was nice for her to talk to the designer and for him to explain how he would make it into a real design.”

The Mayor thanked Mr Hargreaves for his work and added: “I think Lois has a future in art.”

Other entrants shortlisted were Ben Wisdom and Wilfred Singer, both 11, and from Gillotts school, Alice Vernon, seven, from Rupert House School, and Austin Rose, nine, and Jakub Miskuf, 10, who both attend Kidmore End primary with Lois. The competition was open to all pupils aged between four and 18 who live or go to school in the Henley area.

Entry packs were sent out to schools, which encouraged their pupils to take part.

The youngest entrant was four years old and the oldest was 12.

The biggest response came from year 5 at Kidmore End, who submitted 20 entries.

Many children used rainbows to represent the theme while others used clouds, hearts, hands or the smiley face emoji.

Jakub drew a boat called Friend Ship with a sail emblazoned with “HYF”. Some entries were abstract and some were produced digitally rather than drawn.

A few entries were rejected for not incorporating the initials “HYF” as required.

Mr Hargreaves, of in8 Creative Design Co., said that when he was choosing the best design he considered imagination, creativity and interpretation of the theme.

He also felt that Lois’s rainbow design was topical following the coronavirus pandemic and the NHS thank-you campaign.

Mr Reskalla said that although rainbows were topical, that wasn’t why Lois chose to include one.

“She has been drawing rainbows forever,” he said. “She’s a bit of a trend-setter.”