Success in boardroom and boat are so similar 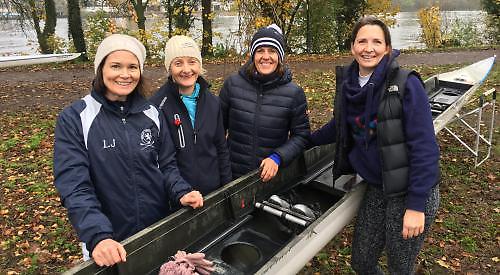 SUCCESS on the water and in the boardroom require similar skills, according to a rower who has published her first business book.

Louisa Clarke, who is a partner in a business consultancy and a trustee of Henley Rowing Club, says both require good communication between team members and a clearly defined goal.

The 51-year-old, who lives in Damer Gardens, Henley, with her husband Nick, took up the sport when she was 16 and a student at King James’ College, which became The Henley College while she was studying there.

She went on to represent Great Britain in the 1987 junior world rowing championships after winning the national championships with a composite women’s eight.

Mrs Clarke gave up the sport after completing an English literature degree at Middlesex Polytechnic and pursued a career in public relations, eventually becoming a board director at FleishmanHillard, a London PR and marketing company.

After having her two children, Joseph, now 22, and Michael, 18, she moved to MSL, another agency, for two years before joining the Caffeine Partnership consultancy, whose co-founder David Kean helped her to edit the book, Catalyst: Using Personal Chemistry to Convert Contacts into Contracts.

She began writing it shortly before the coronavirus pandemic began and says it will help businesses to recover from the impact.

The book argues that businesses can attract more trade by striking up closer and more personal relationships with prospective customers and talking about ways to solve their problems instead of relying on buzzwords and jargon.

Mrs Clarke, who returned to rowing in 2008, had wanted to write a book since she was a child and is proud to have finally achieved this.

She says: “I started at the end of 2019 and had very quickly written about 20,000 words before I sent it to David and after some discussion we agreed to finish it together.

“It has taken a long time to get to this point but everyone else at my company has written a book and I felt like the odd one out.

“David has written two but none on how to win clients in the first place so this felt like the missing piece of the puzzle.

“It’s very exciting to see your name on a book cover and it feels a bit surreal, really. The comments on social media have been amazing and it’s rewarding to make connections with people who’ve found it useful.

“I poured everything I know into it and would like to write a follow-up but I need some inspiration.

“I’m very touched that many of my friends have gone out and bought it — and some have even read it.”

Mrs Clarke moved to Shiplake with her parents, Joe and Sue Jenkins, when she was 11 and went to Gillotts School before attending college, where she spent three years as she failed her first attempt at her O-levels.

She attended Henley Royal Regatta several times and took up rowing after a friend took her out on the water.

She was coached at the college, which rowed from Upper Thames Rowing Club’s headquarters, by former GB athlete Debbie Brown and trained alongside her friend Michelle Pettit, who still lives in the area.

Both were part of the GB junior eight which came fifth at the 1987 world championships in Cologne.

Mrs Clarke recalls: “We didn’t do brilliantly but we were up against some massive Germans and Russians and were totally outclassed — we had no chance.

“However, we got gold in the national championships for the junior eight and silver in the senior women’s eight, where we were up against adults. That was probably our finest achievement.

“It was a brilliant year — I’d just turned 18, learned to drive and was meeting people from all over the country through rowing.

“Suddenly I saw there was a world beyond Henley and I’m still in touch with a lot of those women.”

Mrs Clarke continued to row for Thames Rowing Club in Putney while she was a student but stopped after graduating.

She stayed in London and worked in a women’s fashion shop in Knightsbridge and was inspired to pursue a PR career as the shop had a publicist and she liked the idea of organising events and writing articles for magazines.

She enrolled on a government training course for graduates which placed her with a small agency for a time before she got her job at FleishmanHillard, where she stayed for 14 years. Her achievements included launching the partnership between the Pampers nappy brand and Unicef to eradicate diseases in developing countries.

She met Nick during this time and they were married in 1995. The couple moved to Henley in 2008 as they wanted the children to grow up in more rural surroundings and Mrs Clarke decided to return to rowing for Upper Thames

She says: “I hadn’t done it in 17 years so I was feeling pretty rusty and the sport had also moved on.

“I was used to rowing with a single blade but now everyone starts out sculling so I was back to being a novice.

“But it was great to get back on the water — I think if you live in Henley and have an opportunity to row, you should make the most of living here.”

Mrs Clarke moved to Henley Rowing Club in 2016 at the suggestion of a friend who was putting together an eight for the women’s Head of the River race in London.

She says: “We didn’t do that well but I’m so glad that I did it as it was my first race in years and an amazing experience.”

She has since raced several times at the women’s head in a Henley quad and was invited to become a club trustee about a year ago.

She has been tasked with making the sport more accessible, which she hopes to achieve through outreach programmes, including one recently agreed with the Piggott School in Wargrave.

She has contacted other secondary schools, including Gillotts, and is awaiting a response.

Mrs Clarke says: “Rowing is often seen as an elitist sport because private schools can afford to invest significant resources but we want everybody to feel welcome.

“It would be a shame if anyone at school in the Henley area feels they don’t have access to rowing.

“We’ve got some brilliant introductory courses and I think grassroots and club rowing is expanding.”

Club rowing wasn’t permitted during the coronavirus lockdowns but Mrs Clarke still went out on the water in a single scull and was relieved when normal activities resumed.

She says: “I go out at 6.30am, which means I can be home by 8.30am. It’s a great way to unwind from work because you’re concentrating on your technique and on not bumping into anyone, so you switch off mentally and focus entirely on what you’re doing. It’s very mindful.” Mrs Clarke believes her book will help people who have spent the past 18 months in isolation.

She says: “I think some have forgotten the very basics and, for many, it’s going to take practice. These days, many people recoil at the idea of networking but we make it straightforward by taking away the management speak and jargon. It should be fun for everyone.

“The lockdown started as we were writing and editing so we were able to include advice on managing relationships while working virtually.

“A whole generation of younger people have been stuck working behind screens and may have missed some of the things that others have learned from professional networking — things you only pick up from being around other people.

“It’s very practical and focuses on very specific tasks like preparing for a meeting or what questions to ask.”

Mrs Clarke says the role of women has grown in both her fields.

She says: “When I took up rowing there were no women’s events at Henley Royal Regatta so it’s fantastic to see how it has evolved since then, along with the continuing success of Henley Women’s Regatta.

“There’s still more progress to be made but I’m delighted that women are now attending and competing in significant numbers.

“It’s the same for women in high-profile roles on the boards of businesses. There has been some progress but the number of women writing and publishing business books is still quite low so I’m proud to have managed that.”

She says there are other parallels between the two.

“It’s all about communication, teamwork and having a shared goal,” says Mrs Clarke.

“I love the fact that you can bring a disparate group of people together who have nothing in common apart from rowing, yet they connect because they know what they want to achieve and work towards it.

“It’s the same in business — you have to look for common ground, work collaboratively and be alert to serendipity about who you might meet, how you connect with them and how you might be able to help them.”

• Catalyst: Using Personal Chemistry to Convert Contacts into Contracts is available from the Bell Bookshop in Henley for £14.99, including a limited number of signed copies.