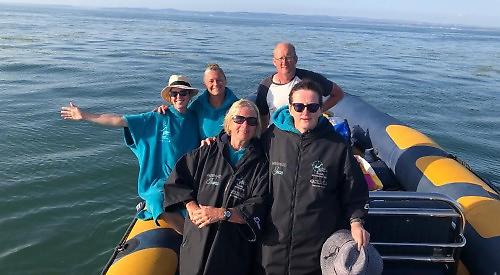 THE Henley Mermaids have had to postpone their attempt to swim the Bristol Channel until next year.

The five women were hoping to make a second attempt at the 45km crossing from Ilfracombe in Devon to Swansea in Wales but the tide and weather conditions meant this would not be possible this year.

In their first attempt in July, they came within 4.5km of reaching the finish but had to terminate the relay swim on safety grounds.

They are raising money for Sunrise for Brain Conditions, a charitable partnership that supports research into Huntington’s disease, Parkinson’s disease, motor neurone disease and multiple sclerosis, and have collected more than £16,000 so far.

Last year, the Mermaids raised £34,000 for the music school by swimming 21 miles across the Channel.

Ms Reineke, of Damer Gardens, Henley, said it was “very annoying” to have to postpone the swim.

“The problem is finding the right time to do it,” she said. “We are all swimming the west coast of Ireland for the Great Fjord Swim next weekend and then Joan is staying in Ireland as she hasn’ been able to see her family for months.

“There was no window available and then by the time you get to October and November it is too late in the season. We will do it again next year.”

Ms Reineke and Mrs Fennelly, who lives in Makins Road, are both planning to swim the North Channel next year.

Along with crossing the Channel and Bristol Channel, this challenge forms a series called the Triple Crown. It involves swimming from Northern Ireland to Scotland and is the hardest of the three events.

Ms Reineke said: “The water is about 10 or 11 degrees and it has got some very dangerous currents and jellyfish, so it’s quite a serious swim.

“The other girls don’t want to do it but all the Mermaids will keep doing other events.

“We are looking for sponsorship but we haven’t decided on a charity at the moment.”