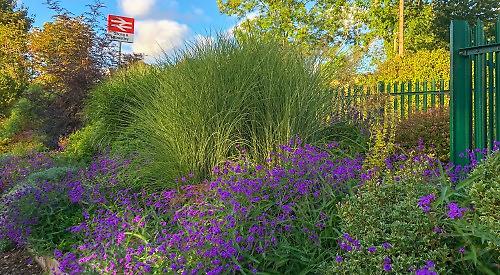 GORING has been praised for its entries in this year’s Britain in Bloom regional awards.

The town received an “excellent” award in both categories it entered — Pride of Place and Managing the Environment.

This year’s awards were held virtually rather than involving the usual in-person visit by judges.

For this, the Goring in Bloom group had to submit a report on its work featuring photos, short videos and accompanying descriptions.

The Pride of Place award celebrates the way each entrant has cared for its local environment, keeping it clean, maintaining landscaping and looking after street furniture.

The Managing the Environment award celebrates what each group has done to commit to sustainable environmental practices.

Stephanie Bridle, who chairs Goring in Bloom, said: “Normally there’d be a ceremony to celebrate but none of that’s happening this year with everything being done virtually, so it’s very different.

They also praised the “amazing” work at the station which has taken place in recent years, highlighting this year’s work clearing the final bank and adding more sustainable planting.

The judges also praised the volunteer litter-pickers, observing that extra litter had been an unfortunate side effect of the pandemic. The group was also praised for its publicity and promotion, including “widespread” use of a new logo, which had helped to raise awareness, recognise the efforts made and attract new sponsorship, support and volunteers.

The judges added: “It is lovely to hear that the volunteers get well- deserved praise from the local community and visitors.

“Their enthusiasm and commitment have inspired others to get involved. The group deserves congratulations on maintaining the Bloom initiative despite the challenges it has faced.

“Residents and visitors have benefitted from a cleaner, tidier and colourful Goring-on-Thames.”

For the Managing the Environment award, the judges praised the focus on responsible water use.

They said that managing to secure permission for a water butt on the station platform was “quite an achievement.”

Goring in Bloom installed the automatic watering device beneath the sloped flower bed at the station last summer.

It consists of a system of pipes under the soil which hydrate the roots directly on a timer.

It means the volunteers don’t have to regularly water the 125 sq m bed using a wheeled bowser.

The judges also said: “The floral boat Blooming Boatifull must give pleasure to many passers-by, both on the river and the river bank.

“We hope the group with continue its excellent work to further enhance Goring for the benefit of residents and visitors, while caring for the environment, for many years to come.”

The judges urged the group to perservere with plans to install new signs on the village’s entrance roads.

• Goring won a national gold award and recognition as the best small town in Britain when the competition was last held in 2019.