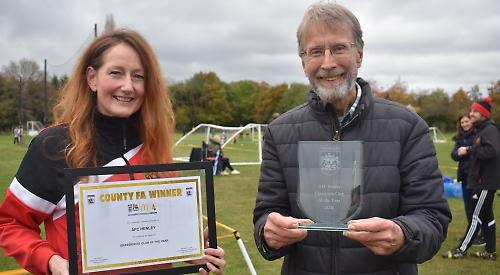 AFC Henley have been named best grassroots club of the year by the Oxfordshire Football Association.

It is the first time the club has won the award, which was presented at Jubilee Park, off Reading Road, on Saturday morning when many of the club’s youth teams played their matches.

The club was praised for its focus on developmental football, meaning it focuses on children having fun and gaining values and skills for life rather than on winning.

The ceremony was attended by the club’s coaches and volunteers as well as Deputy Mayor Michelle Thomas and town councillor Ken Arlett.

James Shiplee, who presented the award on behalf of the Oxfordshire FA, said: “The club award is highly contested as there are 200 clubs in the county and a lot of them are doing good stuff.

“AFC Henley just had everything in terms of developmental football — the introduction of a girls’ team is great. Everything the club is doing on and off the pitch is outstanding and all these little things add up.

“It’s a great privilege to be able to hand over this award. We spend most of the year asking you to do things so it’s nice to be bringing something back and to say thank you for the work you do.

“To see all this on a Saturday morning is a delight and I’m told I wasn’t here early enough to see it at its busiest.”

Club chairman Trevor Howell said: “We’re delighted to receive this award, which the club does deserve. When I first joined we had eight teams and weren’t really getting the numbers. It’s very tough to build up the numbers if you’re starting a new team from scratch.

“What has helped is the soccer club, where we get young kids in to train and their parents can see that when they’re older they’ll be able to move up into the teams.

“There’s a lot of pressure — we’re all volunteers. It’s like running a business and we have to follow safeguarding rules. Parents expect their children to be looked after just like they would be at school and they expect value for money and a good service.

“It’s developmental in so many ways, not just for the children but for the coaches it’s often a new experience out of their comfort zone. And for me I’m running a business, which I’ve always wanted to do.

“The award is a fitting tribute to the dedication of the club’s 60-plus volunteers without whom there would be no football. These include members of our executive committee, who have made a massive contribution to the success of the club over the last two years, our age group managers, team managers, coaches, team administrators and community coaches, who do so much to make football enjoyable for the kids.

“Also the small team of helpers, who maintain our three grounds and do the heavy work, and others who work quietly behind the scenes in various capacities. I hope this award goes some way to making them feel their efforts have been worthwhile.”

Club secretary Gilly Lea, who also manages the under-15s team in which her son plays, said: “Last season was very difficult with covid and all the things we had to do.

“We managed to carry on but the coaches had to do so much, especially through the winter, to make sure the children could play sport and get a little bit of exercise. It was invaluable.

“We’ve made great steps forward in terms of the girls’ game. We’ve always had mixed teams and girls have often been some of the best players on them.

“But we’ve recognised now that some girls don’t always want to play in mixed teams and would do better in a female-only environment, so we’ve introduced girls-only training and a girls’ team, who are playing in the Berkshire County Girls’ League. We often had girls who would come in at a young age and then move on. Now hopefully we’ve created a route for them to progress as they get older and hopefully go on to join the women’s team at Henley Town FC.

“We’re doing so well that we don’t have enough facilities to meet demand. We’d love to have more training facilities.

“It is about fun, it’s not about winning at all costs, although we would like to win too.”

John Hooper, a former chairman of the club who is now life president, said: “The club has come a long way since 1974. I came in in 1976 and was chairman for 33 years. It was a struggle in the late Seventies. It looked like the club was going down but we fought and made it recover and now it’s going from strength to strength.”

Toni Aitken, another of the club’s longest-serving volunteers, said: “In 1974 we only had one team. It was made up of kids who messed around near the YMCA and we brought them down here. We’ve now got more 600 children. I feel so proud.”

Cllr Thomas, whose husband Dave Horsley is a parent-coach at the club, said: “I’m thrilled for Trevor, who is down here every Saturday. He puts so much work in. The club is so well run, everyone should be so proud.

“My son Tom has been involved in the club since he was seven. Children can come together here and build comradery and values they can take with them for the rest of their life.”