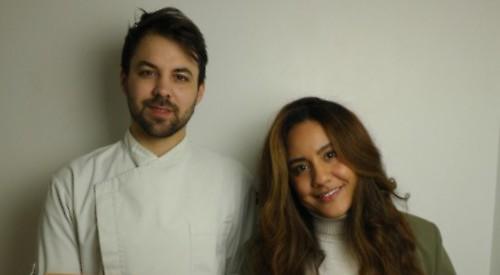 A COUPLE from Henley have started a new online vegan bakery.

Kerina Newell and Joshua Gaillet work out of the kitchen at their home in Adwell Square and offer 18 different types of baked goods, including seven brownies, six cakes and five shortbreads.

The products can be shipped anywhere in England, Wales or Scotland and can also be collected by locals.

The couple, both 31, have called their business Bam Bam Vegan after their nickname for each other.

Mr Gaillet is a patisserie chef who began his training at age 16 in his native Brittany.

Miss Newell, who is originally from Wiltshire, said: “Joshua worked full time from the age of 16 and it was always his dream to start his own business and we thought, ‘Why not put our skills together?’ My background is in buying and communication, which I studied at Bournemouth University, so I do the operations and social media and source all the ingredients.

“The business took about six months to set up and during that time I was doing the box creations, coming up with the name and the branding and Joshua was working on the recipes.

“We wanted to create our favourite household treats without compromising on flavours.”

The couple first met in 2014 while they were travelling around Australia. They thentravelled to Indonesia and around Europe before moving to Henley in January 2020.

“We hit it off straight away,” said Miss Newell “We then travelled together for a bit in Australia before going to Indonesia.

“We moved back to Wiltshire and stayed there for two years before we went travelling in our campervan around Europe.

“When we came back we discussed starting our own business.

“We moved to Henley as Joshua worked at Hurley House Hotel as a pastry chef for about a year and then covid happened so we thought, ‘Why not open our own business from home?’

“In the beginning we had really great feedback in Henley — we had outstanding reviews. It was going really well but has slowed down since then.

“With any small business it can always be quite slow but we’re very optimistic — we’re both being positive.” The products made by Mr Gailett contain no eggs, dairy, gelatin or chemical compounds.

Miss Newell made sure the packaging is eco-friendly and is compostable and recyclable.

The pair hope to move to a bigger kitchen in the future and are considering opening a vegan café.

Mr Gaillet is also working on new items to add to the bakery’s range. such as macaroons and praline cakes.