Volunteers prepare to save spawning toads once again 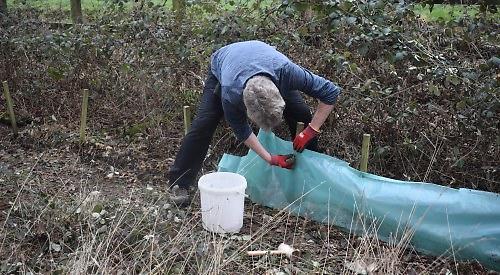 VOLUNTEERS have installed a barrier alongside a busy main road to protect toads from being killed by traffic.

This will prevent the toads, frogs and newts which live in Oaken Grove Wood, part of the Culden Faw Estate, from crossing the road to spawn in a pond on the other side at the Henley Business School at Greenlands.

Instead, when they awake from hibernation and begin migrating, volunteers will collect them at the barrier every night and carry them in buckets.

The breeding season begins when temperatures reach about 7C at dusk and lasts up to eight weeks. Henley Toad Patrol, which was formed in 1987, typically rescues between 6,000 and 10,000 specimens every year.

Co-ordinator Angelina Jones, who has organised the volunteers for more than 20 years, said: “This is an extremely busy road and without the barrier the toads that need to cross it to reach the spawning lake would not stand a chance. It’s so sad to see them run over, especially a mass of them.

“When the weather becomes milder is when the toads start to venture out. Once they start to leave their nests to spawn in the lake, we will come here every night with buckets and torches to help them cross the road.

“All creatures great and small are important to the ecosystem. Here is a local amphibian population that’s in trouble. People put down slug pellets, fill in their garden ponds and overtidy their gardens so the toads are really up against it.

“They do have an identity problem. Some people think they aren’t an attractive animal but they are wonderful creatures. They are so gentle and placid and don’t bite.

“It’s great to be able to help them. It’s so easy and I can come along after work.

“How often do you get to walk around in the wood at night? It’s peaceful and you can hear the owls and moorhens. It is fantastic way to help you relax, especially if you have had a bad day at work.”

Volunteer Allan Staley, a film photographer, of Cromwell Road, Henley, said: “The best thing is putting the toads in the bucket and hearing the lovely chirping sounds they make, it’s almost like they are singing. The sound is fantastic.

“We count them and then release them. We also find frogs and newts. They don’t have predators but the game birds that are produced for shooting sometimes peck the toads for fun. Some toads come back quite badly damaged.”

Susanna Venn, a biology teacher in High Wycombe, is volunteering this year, as she did during the coronavirus lockdown in 2020.

She said: “Although we were restricted and there were only a few of us, it was wonderful.

“I found it really helpful to be doing something constructive as it was a difficult time.

“I like doing my bit for conservation and wildlife. There isn’t much known about toads so this is good to study their habits.”