Mixed reaction to idea of ‘Henley Eye’ in meadows 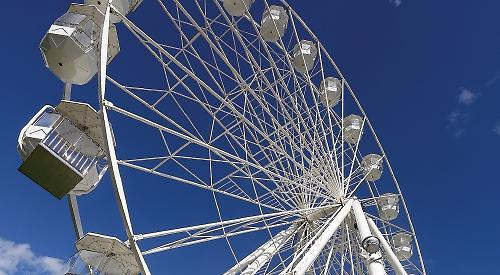 THE installation of a giant observation wheel in Henley could provoke opposition, says the leader of a conservation group.

Geoff Luckett, who chairs the Henley Society, said he wasn’t sure the attraction would “fit” the town and it could lead to comparisons with seaside towns like Blackpool.

The town council was due to make a decision on the idea at a meeting on Tuesday but this has been delayed.

The wheel is operated by Danter Attractions, of Herefordshire, and has been in Stratford-upon-Avon for six months of the year since 2016 where it has been criticised by some.

Each ride would cost about £6 for 20 minutes with five rotations. There would be no cost to the town council.

Mr Luckett said: “My initial reaction is surprise — it’s rather huge. I’m always delighted to see anything that brings people and trade into Henley and it seems like the new town manager is keen to make some changes.

“But I’m not sure this fits in Henley and I wonder what the reaction will be from people like the residents on both sides of the bank.   This will be a fairly huge structure and I can fully understand why the people of Stratford were unhappy. We’re not a dissimilar town in terms of standing and history.

“I wonder whether all aspects of this have been thought through. If it was providing some revenue for the town council that would lower our taxes that would be reason to support but that’s not the case.

“I’m also a bit concerned we’re going to have the area looking like a fairground. People have already said that about the lights on the bridge. Are we turning Henley into Blackpool?

“The problem with it being in this location is everyone will come by car, not by public transport and in summer the parking in Mill Meadows is rammed anyway.

“These are my personal views and may not be the views of our 600 members. With something as big as this we would normally poll them.”

Councillor Kellie Hinton, who is vice-chairman of the council’s recreation and amenities committee, said: “As a town council, we really try and do as much as we can for people who live here but also people that are visiting.

“We have fantastic members of staff like Craig who has a lot of experience around the country, particularly in this kind of project that brings people in.  We want people to come and spend money so anything that makes our town more of an attraction is great.

“But it’s always a balance and we need to weigh it up against the impact on the environment and the impact on our residents. We don’t want to attract tourism if it’s detrimental to residents.

“We also have to consider the impact on the river and the surroundings and make sure this is suitable. That’s the number one consideration.  When we produce any report it considers the impact on biodiversity.

“With any project we try to do the best we can in consulting people. So far, the majority of people seem to be excited about the wheel and that makes me excited but there’s still lots to work out. Overall, from what I’m hearing at the moment, I’m in favour of it.

“I went to Birmingham with the town manager and parks manager to see the wheel in action and I was really impressed with the operation. It wasn’t tacky or like a fairground. I think it could be really successful.”

Phillipa Ratcliffe, who runs Experience Henley, said: “I think it is positive that the new town manager is looking at different ways of increasing footfall and visitors to the town.

“I’m all for ideas that bring people into Henley and would be of benefit to the businesses. I look forward to hearing more information.

“During the regatta people will be heading to that side of the river but we need more information on how it’s going to benefit businesses, including in the town centre.”

John Skuse, chairman of the Middle Thames branch of the River Thames Society said: “It’s nice to see the Henley town centre manager is coming up with bright ideas.

“They may work or may not and he may not get it right first time but it’s nice to see.

“I can see it doing local businesses a certain amount of good, particularly the River & Rowing Museum.

“If it’s only there for a short amount of time and we like it, we can have it again and if not we can say goodbye.

“I’m broadly in favour at the moment but there’s a mix of views from our members. We want more information, such as whether it will be covered by trees or whether it will stand out.”