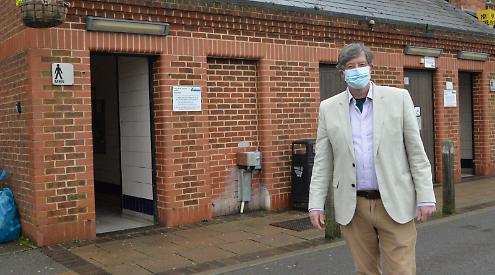 The overhaul of the facilities in Greys Road car park began in January — almost nine years later than originally planned — and was supposed to take about eight weeks. But the opening has been delayed by problems with the door locking system, which meant the toilets could not be used.

The £145,000 project by South Oxfordshire District Council involved redesigning the building to create two separate unisex lavatories, one of which has a baby changing table, and one for women only.

There is also a “Space to Change” facility, which is specially designed for wheelchair access and includes a height-adjustable changing bench and hoist. A RADAR key is needed to enter.

This is in addition to a new welfare room for the car park inspectors and a storage room for equipment such as signs and barriers for use in the car park.

Stefan Gawrysiak, who represents Henley in the council, had campaigned for the refurbishment.

He said: “I’m really pleased with the work — the toilets are a big improvement on what we had.”

Fellow district councillor Ken Arlett said: “It’s incredibly important that we make Henley as accessible as possible for all residents and visitors, so the Space to Change really is an important addition.”

However, the council was left red-faced when it was revealed that its contractor had put the wrong sign up on one of the cubicles which gave the impression that all three toilets were unisex.

Fellow district councillor Kellie Hinton said: “Unfortunately, there was a mistake but this will be changed. We are still having problems with the locks, which needs fixing as we don’t want anyone to get locked in.

“Once the work is completed, council officers will need to sign it off and hopefully it will open next week.”

It was to be similar to the improvements made at the district council’s King’s Road toilets car park five years earlier.

That entire block was demolished following complaints that it was cramped, dark and smelly and replaced with a £100,000 facility with larger cubicles and more natural light.

Cllrs Gawrysiak and Arlett said previously they heard similar concerns about the Greys Road toilets several times a week, mostly from residents who said they were smelly and gave tourists a poor impression of the town.

The council said that other projects have taken priority but the two councillors said this wasn’t good enough as the authority made more than £700,000 in parking fees and fines in 2016/17 in Henley alone and some of that money should be reinvested in the town.