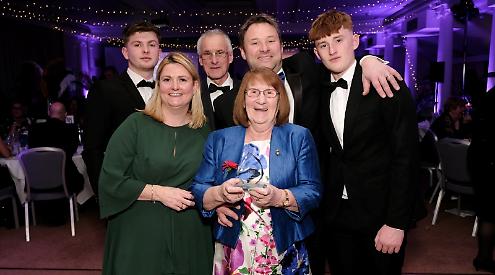 A STALWART of the Royal British Legion in Nettlebed is retiring as Poppy Appeal organiser.

Margaret Butler, who has run the annual collection for more than 38 years, says it is finally time to hand over to someone new.

However, she will remain an active supporter of the Legion.

She said: “I’m 81 and there’s rather a lot to it now. You have to do things on the computer and it needs a lot more time.

“When I first started it was a matter of taking the tins and poppies around but now there are lots of other things, like poppies for cars.”

While most people only think about the Poppy Appeal in the weeks leading up to Remembrance Sunday, preparations actually start months before.

Mrs Butler said: “I start about June checking stock and looking at what to order.

“You don’t want to miss out on different things like yearly lapel badges — I’m sure there will be a jubilee pin this year.

“Later, I deliver the poppies and tins to the businesses. I put out around 20 trays and it’s getting rather a lot now.

“We also have a stall at Nettlebed fair and a coffee morning in May. It just doesn’t stop, it’s not just that fortnight at Remembrance time.

“But I shall still be helping whenever I can. I cannot give it up altogether.

“When I first started, we used to have to put the poppies together ourselves with the stems, the black buttons and red petals.

“The emphasis then was on the poppy but there are now more things to make money from.

“These days people do not have cash in the house, so we are not getting so much at the door and supermarkets put out poppies for sale early and people say they have already got one. But it really doesn’t matter where the money comes from as long as we get it.

“I have always wanted to raise as much money as possible for the army, navy and air force boys who put their lives on the line for us and for their families if they lose them. I really believe in that. They give us our freedom.

Originally from Kent, Mrs Butler has lived in Nettlebed since 1968.

She remains an active volunteer in the village, taking people to hospital appointments, helping to organise regular coffee mornings and lunches for pensioners and helping to run the village fete.

In 2020 she was presented with the community award in the 14th annual Sue Ryder women of achievement awards presented at a ceremony at Phyllis Court Club in Henley.

Mrs Butler is married to David, a retired builder, and has three sons, Philip, Ian and Michael, six grandchildren and three great grandchildren.

Mrs Butler offered some advice for her successor.

She said: “It must be someone who really believes in the Royal British Legion and who is going to be passionate about it.

“It’s not just something you do on a short-term basis. You have got to be prepared to do it for a length of time. You are in a trusted job.”

She will be happy to provide her full support.

Mrs Butler said: “I shall continue helping out with the poppies and will help whoever takes over and show them the ropes and be there anytime to help. I do not want to sit about. You get old if you sit about.”

Branch secretary David Challis said: “Margaret is amazing and has been the glue that keeps the Legion branch together.

“Even through lockdown, when we could not do to door-to-door collections, she set up a stall in front of the village club in all weathers.

“She will be very difficult to replace as she is the perfect person for it. Everyone knows her and she is very popular.

“She has been so passionate about it. She has befriended soldiers serving in Iraq and sent them gifts and food parcels. She really is one of a kind.”

Anyone interested in taking on the role will have to go through a formal application and interview process but in the first instance should email Mr Challis with their interest at davidjchallis@aol.com