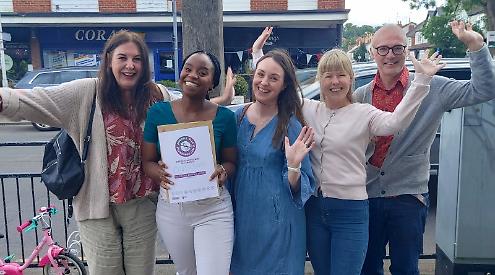 The award made by Surfers Against Sewage, a marine conservation charity, recognises the work being done in the area to reduce the impact of single-use plastic on the environment.

Plastic Free Caversham, which was founded by businesswoman Anne-Marie Evans and former Reading borough councillor Ayo Sokale, has been working with businesses, community groups and schools to reduce their reliance on single-use plastics since 2019.

This involved putting in place a five-point plan, with objectives such as minimising the amount of disposable plastic used, instigating the charity’s plastic-free schools education programme and securing the support of Reading Borough Council.

The group has organised several events, including litter picks and a mass plastic unwrap at a local supermarket in 2019.

It has also raised funds for a new water refill station in central Caversham, which it is hoped will be operational later this year.

Ms Evans, who runs Frangipani Home in Church Street, selling handcrafted and ethically sourced homeware, said: “We are delighted to be awarded this status and can’t thank the community enough for pulling together and supporting us on this journey.

“From residents attending events and supporting our fundraising through to the tangible commitments made by so many local businesses and community groups, it has been a real community effort to get here.”

Ms Sokale, a former deputy mayor of Reading, said: “It’s brilliant to have received this status after everyone’s hard work but we know it’s an ongoing journey to ensure that we continue to uphold this status and reduce reliance on single-use plastics in Caversham and beyond.”

Rachel Yates, plastic-free communities project manager for Surfers Against Sewage, said: “It’s great to see the work that Caversham has done to reduce the availability of avoidable plastics, raise awareness and encourage people to refill and reuse.”

Ms Evans decided to act after visiting Bali, where she sources items for her shop and saw the amount of litter in the sea.

She said: “In this country we think we are recycling responsibly but then I found out it all goes to China and they are rejecting it and it’s going to places like Indonesia and Malaysia and they just can’t cope. That’s what got me started.”

Mrs Evans uses recyclable paper shopping bags and is asking her suppliers in Bali to stop sending her goods in bubble wrap or plastic.

Campaigners in Henley and Sonning Common have also signed up with Surfers Against Sewage.