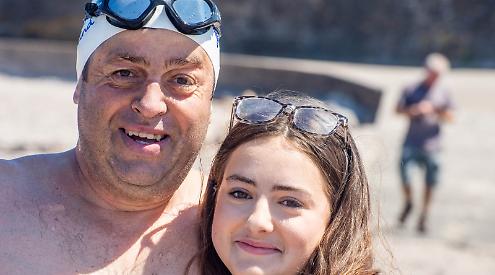 AN electrician has become the first person to swim breaststroke across the Bristol Channel.

Phil Warren, 51, of Whitehouse Road, Woodcote, swam from Penarth in South Wales to Clevedon in Somerset on Thursday last week.

He swam 13.8 miles in choppy conditions in seven hours and four minutes to become only the 11th person to swim the route.

This was the second of four swims that Mr Warren is doing to raise money for mental health charity Mind. So far, he has raised more than £3,000.

The first swim, from Penarth to Weston-super-Mare, took place last month but was abandoned 500m from the end as conditions became too tough.

Mr Warren, a member of the Henley River Rats, a group of four outdoor swimmmers, has vowed to go back and complete it.

He said: “The first swim, which is a straight-line distance of eight miles, was horrendous with the weather so rough as there had been a storm the night before.

“I ended up swimming for seven hours and 11 minutes in 11C water, which is bloody cold, with no wetsuit and just my speedos.

“The tides were so strong that in the end I missed land by 500m and I just couldn’t get there. I ended up swimming 12.5 miles.

“I was absolutely gutted to get so near as I could see the shore.

“But, hey, I am super-proud of what I achieved.

“After the swim I was told by a local that the route was known as ‘The Bitch’ but I will go back and conquer it.

“It didn’t take long for me to get over it and get back into the gym and the water. I had four or five days of total rest and then I was back at it again.”

For his latest swim, which started at 5.30am, he was met on the shoreline by members of the Dawn Stalkers, a local swimming group.

Mr Warren said: “They swim there every morning at sunrise and they had heard about my swim so I was greeted with 24 of them in the water to see me off and wish me well.

“That was absolutely awesome and was a huge boost.

“As the crow flies, the distance is 11 miles but you are never going to go in a straight line because of the tides.

“We started about two hours before low tide and you swim out as fast as you can and then the tide turns and it is on your side and takes you to Clevedon.

“The water temperature was 16.5C, which was nice, but the conditions were super-rough, which was not helping. It was like being knocked around in a washing machine for six hours.

“I was being hit by waves from the back, front and sides and didn’t know when the next one was coming. It meant that I was under the water a lot and I got seasick and threw up quite a bit.

“I normally have a safety boat on my right-hand-side but the conditions were so bad that the boat moved to my left in order to protect me as much as possible.

“It was overcast and dry but the sun didn’t emerge until about an hour from the end of the swim.

“The middle bit was the hardest. I had two crew on the boat, the pilot and another guide, who would tell me where to aim for.” Mr Warren would stop every hour to take on food and the crew would use a whiteboard to give him messages.

He said: “Lots of things went through my head along the way and by the end I was thinking, ‘Let’s get there, I want a beer’.

“After every hour the crew would throw me some food so it meant I could break it down into hourly swims. I would be given high-concentrate liquid carbs as well as bananas, peaches and jelly babies.

Peaches are good because they go down easily and take the taste of salt away but it is more about the liquid carbs because that gives you the fuel to keep going.

“The first whiteboard message I remember seeing was that it was under four miles to go, which I calculated was only six laps of Caversham Lakes and I do that each day so it’s easy.

“One of the last messages was that my mum, daughter and friend were on the slipway waiting and if I didn’t hurry up my mum wouldn’t be happy because she doesn’t like it being late.

Mr Warren landed at 12.32pm and was met by his 15-year-old daughter Zara who had been given an authorised absence from Gillotts School in Henley to be there, his mother Lesley, and friends Nic Court and Mark Reed.

He said: “It was hugs all round and I put on a dry robe to warm up and we had a good chat.

“We could only be on the slipway for 15 to 20 minutes because of the boats moored there. We then jumped into the boat and did a 20-minute journey back.

“It’s funny when you think I had just swum seven hours and it’s only 20 minutes by boat.

“When we got back we went back to our Airbnb and I had a shower and changed and we went out for a few beers and lots of food before a sleep.”

Mr Warren’s next crossing attempt will be from Glenthorne to Porthcawl on August 20 and then from Ilfracombe to the Gower, near Swansea, on September 17.

If he completes these as well as the crossing to Weston-super-Mare he will set a world record.

Mr Warren, who is self-employed and the other three Rats attempted to swim the Bristol Channel last year but had to abandon the challenge when one of them suffered severe seasickness and dehydration.

They were five hours and 16km into their 45km journey from Ilfracombe to Swansea when they decided to stop.

Mr Warren, who suffered a major mental breakdown after separating from his wife and sought help from his GP, then decided to do four crossings on his own for the charity.

He trains at Caversham Lakes, which he has been allowed to use free.

“The next crossing is 15 miles in a straight line. I know I can do the distance, it’s all about hitting the tides right.

“If I do it, it will again be the first breaststroke crossing, although it has been crossed six times before.”