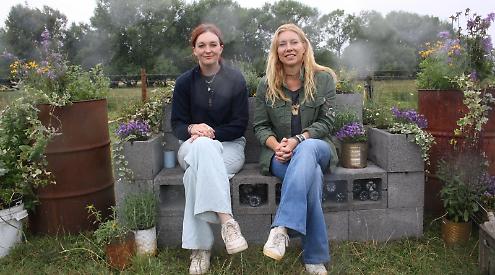 AN environmental campaigner from Peppard practises what she preaches.

Lynne Lambourne, 47, has created a “rubbish” art installation at the Lockdown Lodge, which opened last Friday on the south bank of the Thames Path, near Hambleden Lock.

The centrepiece is a breeze-block bench and oil drums, which also featured at her Chelsea Flower Show garden, and will be added to throughout the stay of the pop-up restaurant.

Lynne had been approached by Minna Hughes, who launched the lodge in July 2020 with her father Chris and has returned every year.

They came up with a theme to create awareness of the damage that’s caused by waste in the world’s waterways.

Lynne, an interior designer, said: “Because the lodge is by the river we wanted to use that spot to raise awareness of the river and the need to look after it.

“I’m all about recycling and reusing things to reduce waste and that’s why we thought we could reuse some of my exhibits such as the breeze-block bench which we have filled with plastic bottles. I have built up and round it and planted succulents and wild flowers to go with the theme of the river and the idea of nature taking back over.

“We have also used some pallet furniture and I have planted up succulent plants in old tins as well as used the oil drums I had at Chelsea, which were to represent fossil fuels and to show people the things we have done wrong.”

She has also incorporated some of the rubbish she fished out of the Thames with Sir Steve Redgrave following this year’s Henley Royal Regatta and the plan is to add to the installation until the restaurant closes on August 14.

Lynne said: “It looks really good. It is such a perfect location that there isn’t really much need for styling. It blends in with the environment seamlessly.

“I’ve had a lot of feedback already, mainly from mum bloggers on Instagram. They come down with their kids and have clearly noticed the bench. The feedback I have been getting is that people love it. We are going to keep adding to it until the restaurant closes in August. Hopefully it doesn’t grow too much bigger, as that would mean there is still rubbish in the river.”

On Sunday, Lynne will be leading another river clean to ensure that the area is spotless.

She said: “Since the regatta clean a lot more people have approached me about whether we are going to be having another one, which is a great. A lot of people want to join in so there has definitely been a bit of a shift in terms of attitudes.

“What this also does is highlight to businesses that people like me are watching and that they should take action to reduce waste and be more sustainable. Minna has a brilliant head on her shoulders and we have had some great conversations about waste, recycling and sustainability.”

Minna said she first met Lynne at the lodge last year and has followed her on Instagram.

She said: “I followed the work that she did at the Chelsea Flower Show and she had something important to say.

“At the lodge we try to be as sustainable as we can and recycle as much as we can but we wanted to have a message and so I asked Lynne if she would be interested in helping us do that.

“We have had art here before but we wanted to be a bit more purposeful and so I met with her again and the ideas spiralled from there.

“Now that it’s here, I love it, as it fits in so well with the lodge and everything we look to embody. We really care about the river, as it is something that is so valuable to our location.

“We’ve just had a really busy weekend because of the good weather, and so many people were using the river and people have definitely been getting the message behind it as well. It is helpful to highlight the dangers of polluting the river.

“A lot of our customers are boat owners, and it is them that produce a lot of the rubbish. This gives them a little jolt about how much rubbish is really in the river.

“For the people of Henley the river is their home and we need to look after it. We want to be able to tell people we should look after what we have come to rely on.”