Video: Plane sailing in the floods

THE flooding in Henley gave one man a new place to enjoy his hobby.

Click here to watch our video report of the plane.

The 43-year-old donned wellington boots and waded through several inches of water out on to the field. 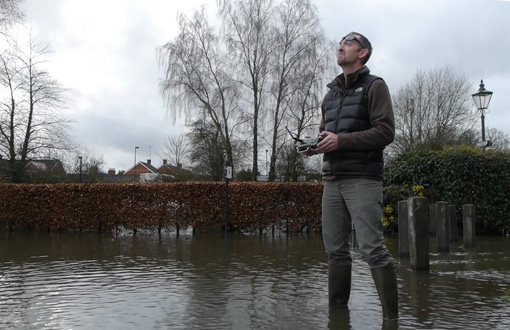 He stood near the Leichlingen Pavilion with his remote control and practised making his model take off, land and fly in circles.

As the plane picked up speed on the waters surface, flocks of Canada geese scattered into the air to avoid it.

The model, a scaled-down version of a Piper Super Cub, was Mr Hepburne-Scotts first purchase when he started his collection 10 years ago.

However, this was the first time he had flown the plane on water since replacing its landing gear with floating pontoons.

The foot-long plane costs about £150 and its body is made of polystyrene. It is powered by rechargeable batteries and can reach speeds of up to 30mph.

It can be controlled from up to two miles away and can fly for about 10 minutes on a single charge.

Mr Hepburne-Scott lives in Earley with his wife Rebecca, who grew up in Henley, and their children Charlotte, Jemima and Oliver.

He said: Like a lot of people, we came here with our children to look at the floods. I was looking at the fields and thought it might be a good place for a seaplane so I came back again.

This was my first time with floats so I was a little bit unsteady in the air. The floats are quite heavy and make the plane wobble a bit but thats something to get used to.

The conditions would have been perfect if the wind was a little bit less but they were nearly perfect.

He said the Super Cub was ideal for learning as it has a slower top speed than other models, which can reach 80mph. It has three controls  one to raise or lower the throttle, another to change altitude and a third to bank left and right.

Mr Hepburne-Scott regularly flies over open spaces in the Reading area with other enthusiasts.

He said: People take an interest all the time. I cant fly anywhere without people wanting to know what plane Im flying, how it works and how long it takes to pick up.

If youre prepared to crash a few times and practise hard, you can be up in the air and enjoying the flying within a couple of weeks.