DRIVERS faced more misery today as roads in and aound Henley were closed due to flooding.

Thames Side, River Side, New Street and Mill Lane were shut and Bell Street was closed southbound at its junction with Kings Road and Bell Lane due to surface water.

On the Berkshire side of the river, Wargrave Road was closed near the Piggot School.

Henley town centre was congested and queues of traffic built up on all approach roads even before the morning rush hour.

Flood warnings have been issued to communities all along the Thames, including Henley, Shiplake, Wargrave, Caversham, Playhatch, Sonning, Mapledurham, Goring, Whitchurch, Hurley and Medmenham.

The River and Rowing Museum was shut for the second time in five weeks on Saturday as staff and visitors couldnt reach the entrance due to flooding.

A 33-year-old pregnant woman and a 16-year-old girl were rescued by firefighters after driving into waist-deep floodwater in Loddon Drive, Wargrave.

The woman was not sure of where they were so it took fire crews almost an hour to find them with the help of a police helicopter.

When they were rescued, one of the females was on the roof of the vehicle.

Firefighters reached the car using a dingy and with the help of a member of the public with a Land Rover.

Sonning Bridge was closed for the second week running, causing congestion on Reading Road, Henley, as well as in Caversham and Reading and on the A4 near Charvil.

A statement for the Environment Agency said: The River Thames at Henley, Remenham and Medmenham has risen in response to the rainfall earlier in the week. Property flooding is expected to continue.

The current river forecast suggests that by the middle of next week the river in this area could reach higher levels than those seen in January 2003.

More rain is forecast for tonight and Wednesday night. 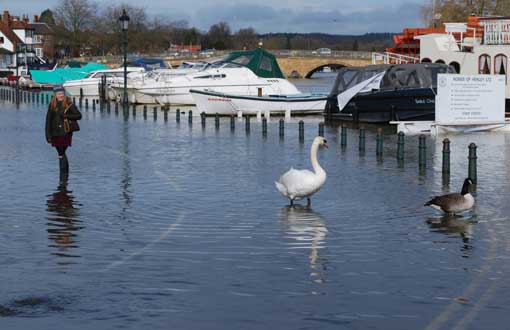