CHILDREN and pensioners had to be rescued from their homes as floodwaters in Henley rose to a metre high.

Hugo Loudon, who runs Heritage Tree Services in Stoke Row, used a truck with huge wheels to pick up them up from Mill Lane yesterday.

Among those he rescued were three children, including a 10-year-old, who had to be carried from their house on their fathers shoulders.

My Loudon also came to the aid of an elderly couple after the firefighters said they would not be able to reach them.

He said: Ive rescued people down here before and this is the only vehicle that can go through a metre of water comfortably. When driving you have the deal with the power of the river and theres a strong side current, so its not easy.

Mr Loudon was assisted by Mark Schemilt, who rode along and helped lift residents into the truck.

The fire service said it had received hundreds of calls and would not be able to get to everyone.

Meanwhile, there was more traffic chaos in Henley and Caversham today due to flooded roads being closed.

Wargrave Road is closed between White Hill and Kentons Lane while New Street, Thames Side and River Side in the town centre are shut and Bell Street is closed to traffic coming into Henley.

Remenham Lane is shut between Wargrave Road and Church Lane and Sonning Bridge remains closed for all traffic.

Flooding has also cause disruption to rail services with many trains to and from Paddington being cancelled. 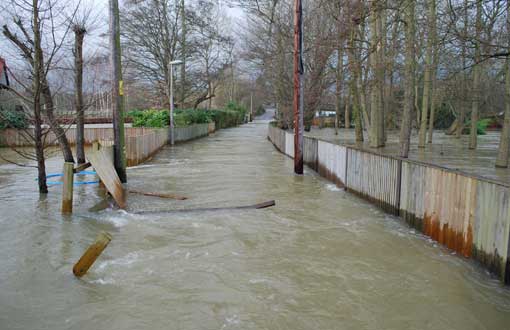