A CHIMNEY fire at a Henley pub led to a street being closed and inconvenience for customers at businesses nearby.

The blaze at the Angel on the Bridge started at about 10.30am on Sunday shortly before the pub was due to open for the day.

Pub manager Trisztan Marton had just lit the fire when it set light to the chimney.

He said: I put some kindling on, two pieces of wood, and went upstairs.

When I came down there was smoke everywhere. I opened the doors and called the fire brigade. I was shocked  it was bad, very bad.

Mr Marton, 30, poured water on the fire which put out the flames before two fire crews arrived.

The firefighters closed Thames Side, which had only re-opened earlier in the week having been closed for several days due to flooding.

Landlord Mark Dunlop, 52, said: Because it was half term and it was a nice sunny Sunday, there were an awful lot of people around. The fire brigade taped off the building and closed Thames Side.

They wanted to check the chimney stack and chimney pot as they felt it might have been cracked. This affected the traffic coming into town for an hour-and-a-half and obviously had a significant impact on business.

Customers were not allowed into Italian restaurant Villa Marina on the opposite side of the street and the Chocolate Café further along the road was also affected.

Vivienne Connery, 47, who runs the café, said: All the customers had left and no one was coming in, which is unusual for us.

Csaba Vincze, 34, a waiter at Villa Marina, said customers who booked tables at the restaurant had to wait until the firefighters had finished before they could eat.

Firefighters checked the pub chimney for damage as well as a couple of the staff rooms and the attic before giving the all-clear at about 1pm.

Mr Dunlop said the pub kitchen had been closed for more than two weeks because of the floods and the pub was offering just a sandwich menu.

The kitchen was also closed for 11 days last month due to floods.

Mr Dunlop said trade was down by 60 per cent on last year as a result.

You lose the food plus the ancillary drinks that go with it, he said.

Key trading days such as Valentines Day, where eight couples and a table of five had to cancel, and half-term this week had been affected.

The pubs riverside terrace would normally be open at this time of year but it has been closed due to flooding.

Mr Dunlop said the chimney was cleaned twice a year but he would now have it cleaned three times. 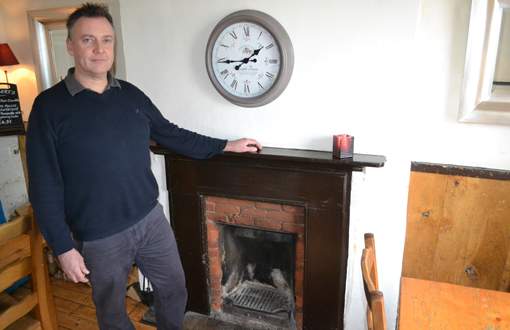