'It's a Wonderful Life' for local postman

A POSTMAN was left speechless when more than 50 people treated him to a flash mob to mark his 50th birthday.

The event was organised by Mr Browns wife, Suzanne Aldridge, and witnessed by more than 70 of his friends.

Mrs Aldridge led Mr Brown to the steps of the town hall at 4.30pm at which point hidden speakers began to play Barry Whites Youre The First, The Last, My Everything and dozens of people started dancing.

Several passers-by stopped to take pictures and drivers slowed down to watch the dance.

Mr Brown said: It was lovely but Im a little bit speechless.

What can you do when you turn round and see all those people dancing for you? You just have to lap it up.

I feel sorry for my wife having to keep it secret. Its definitely the best present Ive had all day and how she organised the weather after all the rain I dont know.

I havent got a clue what shes got planned now, shes full of surprises.

Mrs Aldridge, 51, came up with the idea of a surprise after seeing the same stunt on TV over Christmas and had to keep it secret from her husband for two months.

She said: I would like to say a big thank-you to everyone who helped to make the day so special for Steven and the warm glow it left.

Steven said he felt like George Bailey from Its A Wonderful Life on seeing all his friends gathered for him.

This last month felt like I was having an affair  Ive not been sleeping or anything. I had to keep it secret for months. Now I want to do it again!

The couple live in Middle Assendon with their daughters Ruby, 14, and 12-year-old Georgia, who are pupils at Gillotts School. They met in the Eighties at a nighclub in Staines, where they were both living at the time.

The couple were married at Henley registry office in 2009. All guests were asked to wear wellies for the ceremony as they would have to walk along a country road back to Middle Assendon for the reception.

Mrs Aldridge said: We give each other little surprises but weve never done anything like this. Im a bit scared he might be planning one for me now!

As soon as it finished on Saturday everyone said they wanted to do it again. Im already thinking about doing another one for his 60th birthday.

The music was provided by Hugh Leigh, of HDL Audio Visual Services. 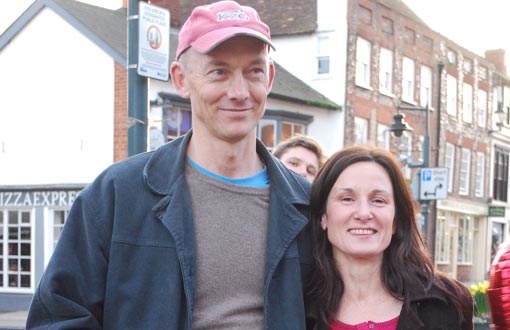