A TEACHER had a lucky escape when he plunged into the River Thames as he tried to help a school rowing crew.

He was in a launch helping the eight from Shiplake College which had become stuck at Shiplake weir when his boat overturned and he was plunged into the water.

The man, who works at the college, was then swept through the weir before resurfacing at the other side. He then managed to climb out of the river.

He was treated by paramedics at the scene before being taken to the Royal Berkshire Hospital and later discharged. 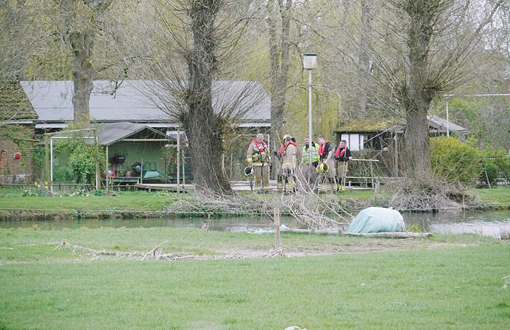 The school has launched an investigation into the incident, which happened at about 4.45pm yesterday (Monday).

Two crews of year nine boys were taking part in a training session with two launches when the eight was caught in the current near the weir.

Headmaster Gregg Davies said: “On Monday afternoon, while training on the River Thames downstream of the college, a rowing boat with nine boys came into contact with the safety ropes ahead of Shiplake weir.

“In assisting the boys, one safety launch from the college became entangled with the safety ropes and subsequently overturned.

As a result, a member of staff spent a short period of time in the water. He was treated at the scene by paramedics and attended the Royal Berkshire Hospital as a precaution. He was later discharged without requiring further treatment.

While thankful and relieved that all those involved are safe, I regard this as a very serious incident and have instigated a full investigation.

I am extremely grateful to my colleagues for their quick responses under duress, to the emergency crews and the Shiplake lock-keeper and his wife who responded swiftly, effectively and with great professionalism.”

The crews were on the river despite the Environment Agency issuing a yellow warning for that stretch, recommending boats without engines stay out of the water.

Mr Davies said: “The daily risk assessment was carried out as normal, taking into account the yellow advisory warning.

We also followed the colleges safety policy and assessment criteria of local rowing conditions, in line with guidance from British Rowing.

Based on the prevailing conditions only certain crews and vessels were allowed out following a briefing to staff and pupils.”

A spokesman for the Environment Agency said: “We put out the yellow stream condition warning boards on that stretch of river, which means we recommend unpowered craft dont go out and even powered craft think carefully about it.

It is only guidance - people have right of navigation and can go on the river as they want. We know of people who go out in stronger currents but its up to them to do their own risk assessment.

If they do go out on the river in these conditions they need to keep away from weirs, where the current is obviously even stronger. We will review this incident fully.”

Police, fire and ambulance crews were all called to the scene.

A spokesman for Oxfordshire Fire and Rescue Service said they had been told there were three people in the water.

He said: “We sent a rescue boat, a 4x4, two fire engines and pumps. By the time we got there everyone was out of the water and fine. One person was checked over by an ambulance crew.

A boat crew then went up and down the river to check there wasnt anyone else in there.”