MORE than 2,000 people flocked to Mill Meadows in Henley on bank holiday Monday for the annual May fair.

The riverside was packed with families who enjoyed attractions including ferret racing, Morris dancing and a human fruit machine.

There was also a giant bouncy castle and inflatable slide for children.

Rock band Mythical Men performed on the bandstand, playing songs such as Robbie Williams Let Me Entertain You and Coldplays Paradise.

The Ellington Morris dancers gave a display and there were fairground games including strongman striker and a coconut shy.

Click here to view our photo gallery of the event.

There were stalls run by groups including the Royal National Lifeboat Institution, the girl guides and Henley Lions Club.

The traditional duck derby, run by the Lions, had a new twist this year as a strong current prevented it from being held on the River Thames.

Instead, Mayor Stefan Gawrysiak climbed into a huge bag with more than 2,000 rubber ducks and dived down to fish out the winners.

The Lions also brought back the human fruit machine for a second year.

Players paid 50p for a go as Lions Ian Tritton, Chris Adam and Robert Fordham each picked a random piece of fruit from a bag. If the three fruits matched, the player won £1.

STA Ferret Rescue stafe the ferret race. Punters bet on their favourite before the animals raced down a tube and tackled obstacles including a see-saw, ramp and balls. Swift pipped his fellow ferrets to victory and was greeted with a huge roar from winning punters as he crossed the finish line.

In the childrens fancy dress competition, Matilda Macartney, seven, from Nettlebed, won for the second consecutive year with her May fair queen outfit. Siblings Olive, four, and Iris Chambers, two, came second and third with their clown and owl costumes.

In the baking contest, Katy Ivanova, 12, from Bracknell, won the big cake contest with her spicy orange cake, while 11-year-old Anouska Hawkes won the cupcakes prize for her strawberry milkshake cakes.

Emily Adshead, seven, a pupil at Trinity School in Henley, won the prize for the best biscuits with her chocolate chip cookies.

The fair, which is organised by Henley Round Table, raised about £1,500 for local charities including Bishopswood Special School in Sonning Common, Camp Mohawk in Wargrave and Wyfold Riding for the Disabled. Round Table chairman Nick Woodthorpe said: Everyone seemed very happy on and we were lucky to have some good weather.

I think more than 2,000 people came so were very pleased to have had so much interest in the fair. 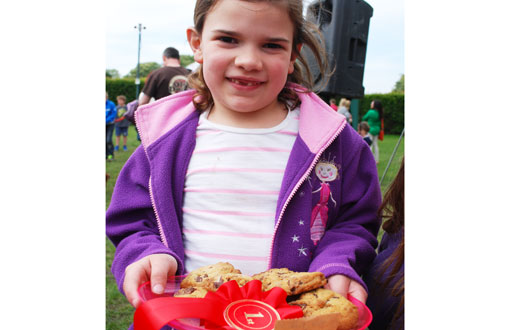