THOUSANDS of people enjoyed celebrations to mark the 75th anniversary of RAF Benson.

Personnel from the base and the Central Band of the Royal Air Force marched through Benson on Sunday morning to St Helens Church, where a service was held.

Click here to view our photo gallery of the event.

In the afternoon stalls were set up around the playing field in Sunnyside and Merlin and Puma helicopters from the base landed. Families were then able to look inside the aircraft.

A Winston Churchill lookalike gave a rousing version of the former Prime Ministers famous Finest Hour speech, which he delivered in June 1940 as the country prepared for the Battle of Britain. Then an air raid siren went off.

The climax of the day was a fly-past by a Spitfire, which performed four laps of the fields. The fighter aircraft was based at the station in 1944.

Gp Capt Nigel Colman, station commander RAF Benson, said: It was wonderful to see hundreds of our neighbours lining the streets as we paraded through Benson for only the second time in recent memory.

We are honoured by the support that both Benson and Ewelme have shown the station over the past 75 years.

This event was about coming together to celebrate our shared history and I believe it definitely achieved that, with somewhere in the region of 2,000 people enjoying the afternoon with us at Sunnyside. The whole spectrum of RAF Benson heritage was on display, with vintage vehicles, historical archives and even Winston Churchill as well as our fantastic helicopters taking centre stage and, of course, the wonderful music from the Central Band of the Royal Air Force.

The stunning Spitfire display was the perfect way to close such a fantastic event, which Im sure will be in our memories for years to come. RAF Benson was opened in 1939 and during the Second World War was the home of an experimental unit that carried out photographic reconnaissance over enemy territory.

Spitfire pilots found their speed enabled them to avoid interception and their camouflage and height rendered them virtually invisible. It was a pilot from this unit who spotted the Bismarck near Bergen in May 1941.

After the war the Queens Flight was located at Benson until 1995 when it moved to RAF Northolt. Today, the base is a frontline support base working within the Joint Helicopter Command. 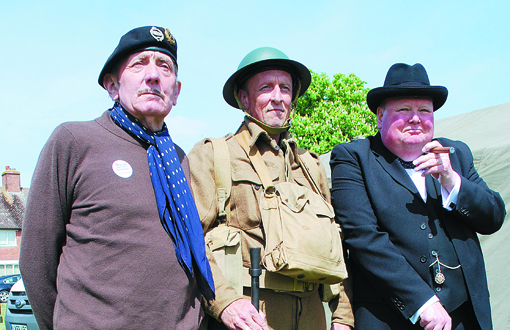