A BUSINESSMAN from Harpsden Bottom has begun his flight from Canada to England in a Lancaster bomber.

Matthew Munson, 34, took off from the Canadian Warplane Heritage Museum in Ontario on Tuesday.

He paid £43,000 to fly in the Avro Lancaster Mk X, one of only two remaining airworthy Lancasters in the world.

It is the last time that the aircraft, nicknamed Vera, will make the journey over the Atlantic.

The museum, which owns the plane, auctioned the opportunity on eBay. 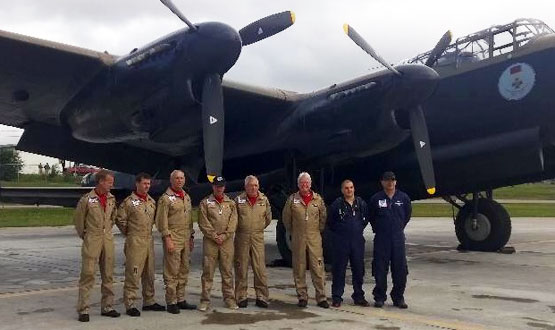 Today, Mr Munson and his seven Canadian crewmates took off from Greenland for their final fuel stop in Iceland.

From there, they were due to fly to RAF Coningsby in Lincolnshire and were expected to arrive today (Friday).

The 3,700-mile trip was meant to begin on Monday but was postponed because the bombers engines would not start.

The aircraft was fine the following morning after crews worked through the night to fix it.

Mr Munson, who lives with his wife Helen and daughter Sophie, five, runs four IT and construction companies and holds a private pilots licence.

He has uploaded photos to Twitter using his mobile phone throughout the flight.

The pictures included shots of the bomber passing by the CN Tower in Toronto and pairing up over the city with an American B-52 bomber.

Once the craft arrives in the UK it will embark on a six-week tour with the only other working Lancaster, which is owned by the Royal Air Forces Battle of Britain Memorial Flight.