A BUSINESSMAN who paid £43,000 to fly a Lancaster bomber across the Atlantic has described the experience as epic.

Matthew Munson, 34, from Harpsden Bottom, was part of an eight-man crew that piloted the aircraft from Canada to England.

The Avro Mk X, one of only two remaining airworthy Lancasters in the world, landed at RAF Coningsby in Lincolnshire on Friday after a three-day journey of 3,700 miles.
Click here to view our picture gallery of the flight.
Mr Munson, who holds a private pilots licence, won an online auction to be part of the crew run by the Canadian Warplane Heritage Museum in Ontario, where the flight began.

When the bomber landed at the RAF base it was greeted by 6,000 people, including Mr Munsons wife Helen, five-year-old daughter Sophie and parents Ann and Steve, from Pangbourne. He said: It was such an epic and emotional experience that its hard to express in words how I felt.

It was a once-in-a-lifetime opportunity and such an achievement. I wasnt just paying for the ride  I wanted to help get the Lancaster over here so that millions of people could see her. Im very proud to have played my part in that.

The aircraft, nicknamed Vera, took off on Tuesday last week from the museum, where the rest of the crew work.

It was meant to take off the previous day but one engine wouldnt start and mechanics worked through the night to fix it.

Mr Munson said: The museum has a great technical team who knew exactly what they were doing so it was never a big problem.

It was a blessing in disguise that it happened while we were still there as we would have been stranded if it happened later on the journey.

We were carrying some very basic parts but only the essentials and we wouldnt have been able to fix it. 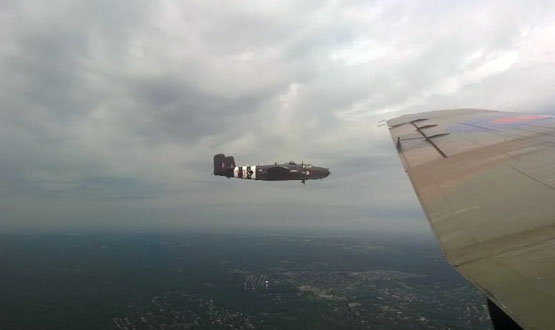 An American B-52 bomber escorted the Lancaster to Toronto before leaving the crew to fly solo.

It was quite surreal but very nice to see them flying side by side with us, said Mr Munson.

Once it left, there was this sudden realisation that we were on our own. The crew were fantastic but it was still a bit scary.

The crew flew for six hours to the Canadian air force base at Goose Bay in Newfoundland, where they stayed overnight and the plane was refuelled.

The next day, they flew to Keflavik in Iceland, eight hours away, and stayed overnight. The following morning, they took off again and flew for six hours to reach their final destination.

The Lancaster has a top speed of about 275mph and can travel about 2,500 miles on one tank of fuel. By contrast, a modern-day Boeing 747 passenger jet can travel at more than 550mph and has a range of about 8,400 miles.

The flight across the Atlantic was not comfortable for the crew as the temperature regularly dropped to -5C so they wore extra layers under their flight suits.

The loud engine noise meant they could only communicate via headsets using microphones and they had to wear ear plugs.

Mr Munson helped to navigate and operated the aircrafts high-frequency radio. He also put the chocks under the wheels when the plane landed and put the crew ladder in place.

He was allowed to pilot the plan for half an hour during the early stages of the first leg.

Mr Munson said: There was enough to do that you never felt bored or claustrophobic up there. I certainly had plenty of chances to get my hands dirty.

It was remarkable how slow it was to respond compared with other craft Ive flown. It was a case of counting to five before youd see anything happen.

We were pretty lucky with the weather. We didnt encounter too much turbulence and conditions were only bad about 10 per cent of the time.

All the veterans during the war would have been flying right into clouds to hide from the enemy so we had nothing to worry about.

It wasnt hugely comfortable but that was a small price to pay for the experience. Its what it would have been like back then.

The crew were so easy to get on with. We were only up there for three days but by the end it felt like wed known each other for years.

The eight men were accompanied by a film crew hired by the museum to chronicle the historic flight and Mr Munson uploaded photos to Twitter using his mobile phone every day.

He said: The most frightening part was reaching the Atlantic because that was the point of no return. We could see icebergs in the ocean below and realised we wouldnt survive if anything happened.

We had life rafts, jackets and rebreathers but I doubt that would have made much difference.

After a formal ceremony, the crew mingled with dignitaries at a reception.

Mr Munson, who runs four IT and construction companies, and his family stayed in Lincolnshire overnight and returned home the following day.

Vera will remain in the UK for a six-week tour with the only other working Lancaster, which the memorial flight owns. It will then return to Canada and will never cross the Atlantic again.