More than 2,500 people soaked up the sun at Holmwood on Saturday  about 20 per cent up on last year and probably the highest total in the 66 years of the annual flower and dog show.

The tea tent takings reached a new high while the sideshow takings were up by a fifth on last year. The dog show entries also broke the record while the class entries were up by about 10 per cent to more than 850.

Show chairman Francis Williams said: I was helping out on the barbecue when I stopped to turn round and I couldnt believe how many people were there.

Takings from the tea tent were up 40 per cent and entries to the dog show were up 33 per cent. 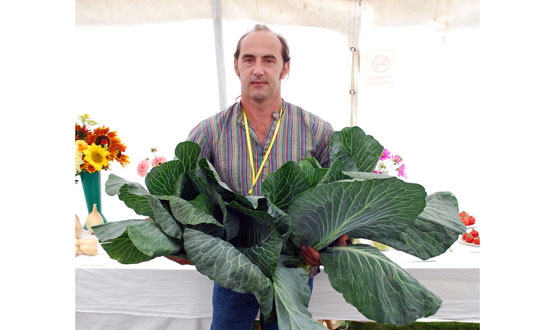 Mr Lewis, who is a member of the show organising committee, said: The leaves are 2ft across and the heart is 1ft across.

I have been exhibiting here for nine years and I have won at every one. Last year I won seven cups.

Vintage cars and army vehicles were on display and Mervyn and Pauline Cotterill, who run the Forge Garage in Binfield Heath, brought their 1948 Morris 8 Series.

Mr Cotterill said: We have had this car for a long time and thought it was quite apt for this show because of the local link with William Morris. Other entertainment included a raffle, tombola, lucky dip, splat the rat, beat the goalie, skittles, hoop throwing and a coconut shy.

There were stalls selling flowers, books, bric-a-brac and furniture and promoting charities such as the Royal British Legion and Wyfold Riding for the Disabled.

There was also an inter-schools art competition, which attracted more than 600 entries and was won by Shiplake Primary School.

The dog show was run by Fiona Tompsett for the first time this year and prizes were provided by Pet Supplies, of Sonning Common.

The show proceeds, which are still being counted, will be divided between local charities and youth groups, including Bishopswood Special School in Sonning Common and the Royal British Legion.

Mr Williams, who has been show chairman for 16 years, said: The committee would like to thank the many volunteers, exhibitors, judges and sponsors who make this show such an enduring success and, of course, the public for attending.

For a full report, results and more pictures, see this week's Henley Standard.