A BOTTLE of water being carried from the source of the Thames to the sea made its way via Henley over the Bank Holiday weekend.

Members of the Rivertime Boat Trust, Henley Rowing Club and the Henley Whalers joined the 215-mile Source to Sea river relay for the second year running.

The event is part of the Mayor of Londons Thames Festival and involves the bottle or baton being carried by different community groups on each leg of the journey.

On Saturday, the Outdoor Swimming Society swam with the baton from Benson Lock to Goring Lock.

It was then carried from Goring to Whitchurch by the Racing and Riverboat Museum and on to Caversham Lock by the Goring Gap Boat Club.

Click here to see more photographs of the event.
On Monday it travelled from Caversham Lock to Shiplake Lock on Rivertime, a cruiser specially adapted to provide river trips for disabled people.

Skipper Lucy Herbert then handed it over to Christine Carey and Mr. Toad from the River and Rowing Museum.

Miss Herbert said: We were really happy to take part and despite the rain everyone had a really lovely time.

The baton then stayed at the museum in Mill Meadows overnight.

Museum duty manager, Sarah Astbury said: We were delighted to be involved in the Source to Sea River Relay 2014. It is a fantastic event bringing ramblers, sailors, swimmers and other groups altogether to celebrate the Thames.

Our own River Gallery is dedicated to the Thames from prehistoric to present day and peoples relationships with it, so it is very appropriate and a real honour to have been custodians of the bottle during its 215-mile journey.

The baton was then passed to Henley Rowing Club coaches David Lister and his father-in-law George Bowsher, who carried it in Mr Listers 40ft saloon launch Lady Genevieve.

Mr Lister escorted the bottle downstream accompanied by 15 girls and boys from the clubs junior 14, 15 and 16 squads. 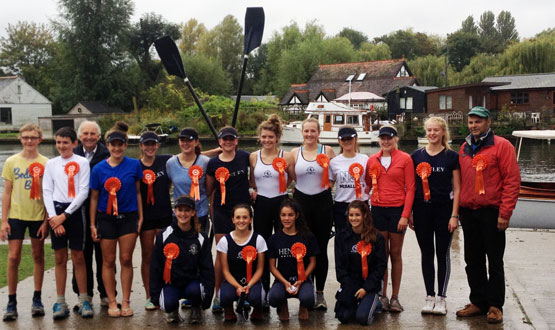 The rowers, including Mr Listers daughters Emma, 16, and 14-year-old Rebecca, rowed ahead of them in an arrowhead formation.

Mr Lister said: We took part last year and it was a really good event and very well organised and enjoyable.

The Henley reach is an historic reach and it is nice to have the opportunity to do something to help publicise the relay.

The rowers carried the baton to Hambleden, where the Henley Whalers took over, carrying it on their boat Molly, a replica of a 19th-century New Bedford whaleboat, through Hurley Lock to Temple Lock.

Jon Cooke, the relays project manager, grew up in Cromwell Road, Henley, and attended Gillotts School and The Henley College.

He worked as an assistant lock-keeper at Marsh Lock when he was a teenager and came up with the idea of the relay.

He said: This is our second year and we are working with a lot of the same partners who took part last year. Certainly in Henley we wanted to work with Henley Rowing Club, Rivertime and the Henley Whalers again.

The bottle will be display at museums in London when its journey comes to an end on September 30. Visit www.totallythames.org for more information.