WARGRAVES cricket team had an unexpected spectator on Sunday when a parrot called Lucky turned up at their club.

The green Alexandrine parakeet had escaped from his home in Tilehurst on Friday and flown more than 10 miles to the club in Recreation Road. 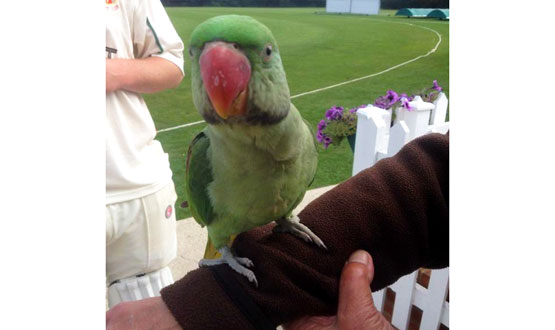 Lucky, who is just three months old, spent about half an hour flying around the ground and perching on the shoulders of locals until first team player Luke Taylor spotted an appeal on Twitter and called his owner, Amena Siddiqui.

Mr Taylor said: It was the last game of the season on Saturday and as we had been promoted we had a club match between two select teams.

I came back from batting and I saw some of the lads were playing with a bird, which was sitting on the picket fence. It was very friendly, hopping on to peoples arms. It was obviously not a wild bird, it was too friendly.

It was happy to be on the ground or near humans and I was worried it could be captured or eaten if we didnt find the owners. After taking pictures of Lucky with various members of the club, Mr Taylor called Mrs Siddiqui and barricaded Lucky in a changing room until she arrived.

He said: None of us are really bird people but we managed to get it into a changing room. We gave it some water and kept checking up on it but it seemed relatively chilled out still.

The owners were so pleased when they came to collect it  you could tell by their voice. They were so pleased we had phoned and the bird hadnt ended up with someone else who might not have.

Mrs Siddiqui, 25, a nursery assistant, said she had spent two days searching for Lucky after he escaped from his cage. She said: We phoned the RSPCA and the police to report him as missing, we went to the park and called his name and I posted an appeal on Twitter.

Then Luke called us on Sunday and sent me a picture of the parrot at the club, which I confirmed was Lucky.

When I got to the club he flew straight to me and had a little cuddle. Im shocked he managed to fly so far.

Lucky is now safely home with partner Happy, a parrot of the same age and breed, and Mrs Siddiqui says she will double check the cage is locked next time.

She said: Happy was very quiet when Lucky left but hes glad to have him back and we will keep an eye on them in the future.

I told the guys at the club that I couldnt thank them enough and if it hadnt been for the tweet we might not have got him back.