A VETERAN from Henley has finally received the Bomber Command clasp - more than 70 years after serving in the Second World War.

Alan Potter, 91, signed up to the Royal Air Force on his 18th birthday, becoming a wireless operator and air gunner.

He served in Bomber Command between September 1943 and October 1944, completing 43 missions.

He had a number of lucky escapes, including one occasion when two incendiary bombs from another bomber hit his plane and became lodged in a fuel tank.

The Government announced in February last year, following years of campaigning by veterans, that the Bomber Command clasp would be awarded to aircrew in recognition of their bravery and service. 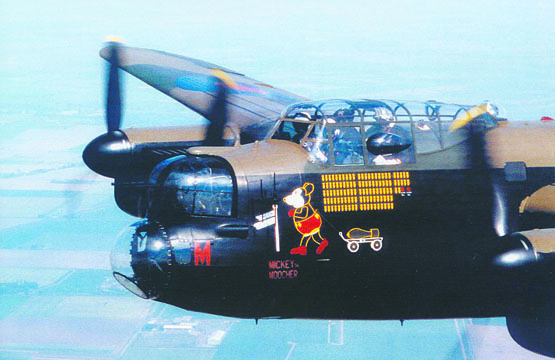 Mr Potter was presented with his by Mark Biggadike, Wing Commander of OC 33 Squadron at RAF Benson, at the Chilterns End care home in Greys Road, Henley, where has lived for the past two years.

The ceremony was attended by members of his family, including his grandchildren Tom Potter and Lillie Bounphrey, who both live in Henley. He wore the 617 Squadron’s tie to receive the clasp, which is worn on the ribbon of the 1939 to 1945 Star and follows the design of the Battle of Britain clasp.

Mr Potter Jnr, 37, who lives in Church Street, with wife Kate, said: “It is remarkable what he did and you can’t imagine the experiences that those men went through at such a young age.

“We are proud to see him and his colleagues from that period be recognised and also tremendously proud and delighted that he is alive to receive it.

“It means a great deal to us that it has been presented to him in person and I know my grandma would have been very proud.” Mr Potter was born in Brighton and lived with his parents in Pilmoor, North Yorkshire, when he signed up for the RAF.

He had wanted to be a pilot but changed his preference to navigator after learning that he would be called up to serve more quickly.

He served in Bomber Command’s 61 Squadron from September 2, 1943 to February 15, 1944 in a Lancaster EE176. He named the plane Mickey the Moocher after his best friend at school and designed a cartoon of Mickey Mouse dragging a bomb towards Berlin, which was painted on the side of the aircraft. He completed 15 missions with 61 Squadron, including nine raids on Berlin, before being transferred to 617 Squadron, best known for carrying out the “Dambuster” raids in 1943.

He completed 28 missions with 617 Squadron between February and October 1944.

After the war, he took part in the Berlin Airlift, an operation by British and American aircraft to deliver food and supplies to Berlin in 1948 and 1949, while Russian forces blockaded the city to isolate it from the West.

He went on to become a test pilot for passenger aeroplanes before joining BEA, which became British Airways. He spent 10 years with the company and retired in his fifties to live in the south of France.

Mr Potter was married to Lyn, who died in 2009, and they had two children, Mike and Carole. He lived with his son in Barbados before moving to Chilterns End to be nearer to his grandchildren.

Mrs Bounphrey, 35, of Greys Road, said: “We have always been incredibly proud of him but it is really nice that everything he did is being recognised.”

Mr Potter, who is chief executive of a sports marketing company, said: “We persuaded him to write his memoirs and they are fantastic. He wrote them like a telegram with ‘stop’ instead of a full-stop.”

Wg Cdr Biggadike said: “It is absolutely vital that we honour those individuals who dedicated so much of their lives back then. It is becoming increasingly rare to be able to do this because there aren’t many of them left.”

Andrew Cheesbrough, chief executive of the Orders of St John Care Trust, which runs the care home, said: “It has been a tremendous personal honour for me to meet Alan and be here when he received his clasp.”

IN his memoirs, Alan Potter recalled having to make an emergency landing.

He wrote: “We were picked out by a searchlight and John initiated a dive and avoiding action. The next thing was a number of thumps on the aircraft and the dive became rather more protracted than was comfortable.

“I had looked through the bomb-loading slit in the floor near my seat and seen Hanover in what seemed a mass of flames and I thought, ‘we are not going to be given a great welcome if we bail out into that!’ After some time and at a much lower altitude than we cared for, we headed for home. All was not well, however, and we eventually made an unscheduled landing at Newmarket — all in one piece but not in too good a state as far as Mickey was concerned with a number of holes in her wings to prove it.

“We had, in fact, in our initial dive passed under one of our own aircraft in the act of dropping its load of incendiary bombs and they had either passed through or found a home in our wings. Someone handed me what I thought was a hot drink but which turned out to be neat spirits and, having taken a good swig, I very nearly passed out on the spot.

“Three days later we were flown to Newmarket to collect her, which we duly did quite happily. Mickey went into the hangar for more treatment and we were cheerfully informed by the boys that we had flown back to Newmarket with two incendiaries still in one of the petrol tanks... great joke!”

After joining the “Dambusters” squadron, he wrote: “I have been asked quite a few times what it was like joining this (now famous) group but I have to say that was exactly like being on the one we had just left.

“The dams raid was seldom mentioned. There was no atmosphere either of despair at the loss of so many good friends or of any kind of triumph or bragging about the success of the mission.

“Nor were we treated as new boys but simply accepted as crews who had enough experience to settle quickly into the life of the squadron.”

These will be held at the town hall (or Market Place if it is fine) once a month from Saturday, September 20 from 11am to noon.

Cllr Nimmo Smith said: “We are offering this service to our electorate in addition to posting topics on Facebook and Twitter and being available by email and phone.

“We want to encourage Henley residents to meet us to discuss any aspect of county, district and town council issues and concerns.”