HENLEY has once again triumphed in the Britain in Bloom competition.

It was crowned the best town in the Thames and Chilterns region and awarded gold for the third year in a row at the regional awards ceremony held at the town hall on Wednesday.

Henley now looks forward to the national awards, which will be announced in Bristol on October 16.

Watlington won three awards and Goring Gap took four and they were joint winners of the conservation and wildlife award. 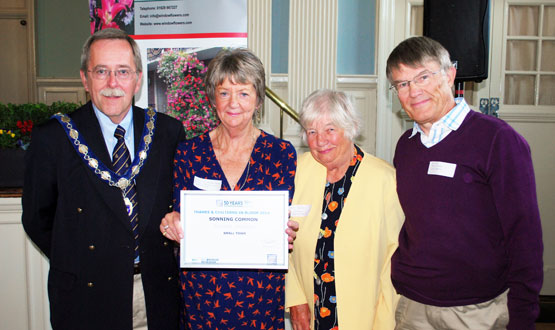 Sonning Common, which entered the competition for the first time this year, won silver in the small town category.

Henley was praised by the judges for involving the whole community with initiatives such as the Henley Standards Going for Gold campaign and the partnership with Brakspear to create a new ale called Blooming Marvellous.

Ted Smith, chairman of the Thames and Chilterns in Bloom Association, said the work of Henley in Bloom had helped to make the town an attractive place to live, work and visit.

He said: Henley welcomed the judges with a presentation that demonstrated the activity and achievement of the teams of volunteers who work all-year round to make Henley so beautiful. The tour began with a river trip where riverside buildings with vibrant floral displays offered a different view of Henley.

He said the judges praised the town for bouncing back after heavy flooding earlier in the year, which affected a stretch of the riverside including Mill Meadows and Marsh Meadows.

Town councillor Kellie Hinton, who chairs the Henley in Bloom committee, said: I am absolutely thrilled to win gold for a third year in a row.

It is getting harder and harder to keep up the high standard each year but I think we are doing pretty well and we will continue to work as hard as we can.

Everything that we do is for the residents of the town and the tourists who visit. We want Henley to look as attractive as possible.

I think the work of the councils parks services team was outstanding and they really helped to create a wow factor this year.

She thanked the Henley Standard for its campaign, which saw a record 171 hanging baskets bought by town centre shops, businesses and residents. Councillor Hinton said: The hanging baskets have looked amazing. We have had so many comments from people who really love the pink and purple colour scheme.

Councillor Elizabeth Hodgkin, who runs the Henley Gardening Buddies, said: We have managed to maintain our standards and it has been a fantastic team effort, not just by Henley in Bloom but also park services and everyone involved.

Everybody has talked about the hanging baskets and I think we must pay tribute to Windowflowers for providing such wonderful baskets.

The Gardening Buddies work so hard and we have had several new members this year who have done such a great job. Some were out at 6am on the day the judges visited.

I feel that this year the town has looked amazing. We do this because we love Henley and we want it to look good.

Henley has now won gold in the regional final every year since 2012 having won silver gilt in the six years before that.

Mayor Martin Akehurst, who presented the awards to members of the Henley in Bloom committee, said: Britain in Bloom makes such a difference, not just in terms of flowers but also people getting stuck in.

I know a lot of people in Henley, including the Gardening Buddies, who help out and I wish they could have all been here today.

Britain in Bloom has certainly done a lot for Henley and we will be keeping our fingers crossed for the nationals next month.

Henley entered the national final for the first time last year and won a silver gilt, missing out on the gold by just two points.

The Gainsborough Residents Association, which was set up to improve the Gainsborough estate in Henley, took part in the Its Your Neighbourhood community group awards for the first time this year.

The awards have five levels of assessment - establishing, developing, improving, thriving and outstanding  and the estate was recognised as thriving.

Paula Isaac, who chairs the association, said: This is our first entry so we are really pleased. We have still got lots of ongoing projects in mind.

More than 20 cities, towns and villages entered the regional competition, while there were almost 30 entries for Its Your Neighbourhood.

Judges visited all the entrants throughout July and their criteria included all-round horticultural achievement, environmental achievement and community involvement.

Mr Smith said: We were delighted by the very high standard across the region. The commitment by all entrants is tremendous and I would like to thank all local Bloom committees and Its Your Neighbourhood groups for their continued support of the campaign.

Watlington won the large village category in the Thames and Chilterns region and was awarded silver gilt award.

Judges praised the Watlington in Bloom group for an environmentally friendly and sustainable campaign, which linked many residents, businesses and groupswith a diverse range of events and activities.

Terry Jackson, who chairs the group, said: We are very pleased to get the silver gilt and especially the conservation and wildlife award because that is our strength and the thing that we concentrate most on.

Judges praised the town for attractive displays in High Street and the range of environmental projects, including the Hope 4 Hedgehogs initiative.

Stephanie Bridle, who chairs Goring Gap in Bloom, praised the work of her fellow committee member Myrna Anderson, a retired teacher who has worked with the primary school for about 14 years.

She said: We are delighted to receive these awards, particularly the Matt Matlock cup because we think Myrna really deserves it for the work she has done. We are really pleased.

Chrissie Phillips-Tilbury, who runs the Village Gardeners group, said: It is our first time so we are very pleased to get a silver. It is all down to the hard work of the village.

This award is lovely to have but it is much more important what the residents of the village think about it. It has brought so many people together.

We were very disappointed to find that we were only two marks short of silver gilt, especially as the low marking was for some areas beyond our control, such as kerbs choked with weeds throughout the village, a poor standard of street furniture and graffiti on the back wall of the village hall.

Britain in Bloom is run by the Royal Horticultural Society and is 50 years old this year.

Click here to see our gallery of award winners.