HUNDREDS of people crammed on to Whitchurch toll bridge when it re-opened on Friday.

David Card drove his 1902 de Dion Bouton over the listed iron bridge to mark the completion of an 11-month refurbishment project costing around £6 million.

In the passenger seat was 86-year-old Nigel Grove, who has lived off High Street for 51 years and believes he has used the crossing more than 20,000 times.

He said: It was a great honour to take part in the ceremony. It was a once-in-a-lifetime chance to be a part of history in the making. 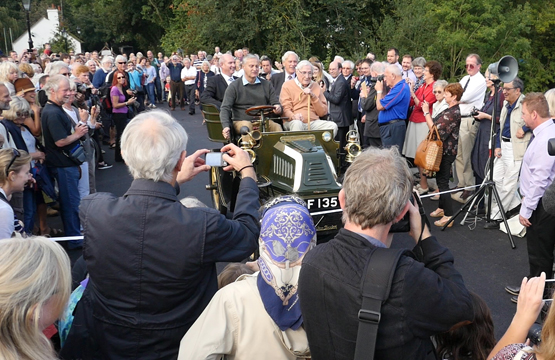 Christopher Delacombe, a descendant of one of the men who built the first bridge at Whitchurch in 1792, rode in the back seat with Andy Cranstone from Barclays, the bridge companys bank.

The vehicle has no electric ignition system and stalled as it approached the crowd so Mr Card had to get out to crank the engine again.

He then drove through a ribbon at the apex of the bridge to formally declare it open.

Marshals kept the crowds on the pavement and behind barriers on the Pangbourne side.

Dozens of people took pictures on cameras or mobile phones and some stood on the metal girders on the side of the bridge for a better view.

Also present were pupils from Whitchurch Primary School, who clambered on the vehicle to have their photos taken.

Mr Card, 65, from Twyford, has owned the de Dion for 30 years and was asked to lend it as it was built in 1902, the same year that the previous bridge went up at Whitchurch. It can reach speeds of up to 30 miles an hour and only has brakes on the rear wheels. Mr Card said: The size of the crowd was surprising. I expected a few people but not as many as actually turned up.

Geoff Weir, the bridge companys secretary, gave a speech thanking engineers Balfour Beatty and the Environment Agency. Afterwards, he said: We werent expecting so many people but its been a really nice event. The weather has been good, the car attracted a lot of interest and everyone was very happy.

I was worried that there wouldnt be space to get the car through the tape but we just about managed it. Everyone, including the company, is relieved that the bridge is open again. It was always our objective to get it open as soon as we could. This is a huge milestone in the companys history.

The ceremony was also attended by representatives of Pangbourne and Whitchurch parish councils, Pangbourne Medical Practice and the Adventure Dolphin centre.

Afterwards, it took 10 minutes to clear the bridge of people. Later in the day it opened to traffic for the first time since October. Tolls were waived until 11am on Wednesday.

Over the past year, engineers have replaced the underside with steel beams to cope with the weight of modern traffic.

The project was meant to finish in April but was delayed by problems demolishing the old bridge and flooding in January and February.

The cost of the rebuild rose from the estimated £4 million largely because of the delays.

Neil Patterson, Balfour Beattys regional managing director, said: This has been a challenging project with the worst floods in recent memory and restrictions on the river affecting the programme.

However, through close working with the Whitchurch Bridge Company and liaising with key stakeholders, we have been able to minimise the impact and deliver a reconstruction which is sympathetic to the original design and stronger, allowing for its use through the 21st century.

The bridge company says it is likely to apply for the Governments permission to increase the 40p cash toll. This will go up to at least 50p as it charges in multiples of 10p to reduce the need to give change. The cost of a pre-paid concessionary crossing has increased from 20p to 29.4p.

THE Whitchurch Bridge Company commissioned Pangbourne bakery Food Kick to make a cake for the occasion.

The cake included a marzipan replica of the new bridge with a model vintage car crossing it.

It was cut into more than 100 pieces which were handed out to spectators.