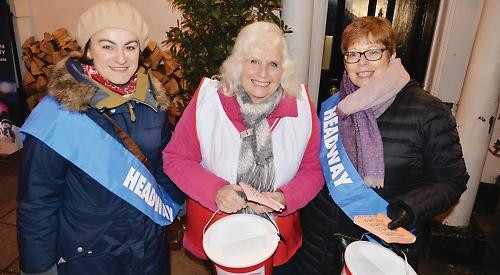 THE sixth annual Henley Living Advent Calendar is on course to the be the best yet judging by the first week’s performers.

Hundreds of people have turned out to see a variety of acts ranging from schoolchildren to a Michael Bublé impersonator performing at different town centre venues.

The annual charity initiative, which is sponsored by Higgs Group, publisher of the Henley Standard, is taking place every evening in December until Christmas Eve and features musicians, dancers, singers and theatre groups, among others.

The identity of each act is kept secret until their half-hour performance, just like opening a door on an advent calendar.

Each evening is dedicated to a different charity, whose volunteers hold bucket collections and promote their work. So far, almost £2,000 has been collected.

The calendar shows began on Thursday last week when the Henley Youthful Orchestra, most of whose members are over 40, performed in Market Place for an audience of more than 100 as well as residents of flats above the shops who looked out of their windows.

The musicians, who wore Christmas hats and jumpers, opened with All I Want For Christmas Is My Two Front Teeth before following with festive favourites White Christmas and the theme from The Snowman. They also played music by Grieg and Handel.

The crowd, who included Mayor Julian Brookes and town councillor David Eggleton dressed as a cavalier, clapped and cheered after each song.

Conductor Stewart Lewins said: “It has been a pleasure to be here and start the Living Advent Calendar. Thank you for coming out to support us — I see a lot of familiar faces. We wish you all a merry Christmas.”

The evening was raising money for the Alexander Devine Hospice and was supported by the Spice Merchant restaurant in Thames Side, which provided snacks.

Calendar chairman Richard Rodway said: “For me the Youthful Orchestra are what the calendar is all about. I saw lots of happy faces.”

On Friday, five-piece folk band Highly Strung played a 35-minute set for scores of people outside Boatique and Hot Gossip in Friday Street during the town’s Christmas Festival.

They opened with Elton John’s Rocket Man and also played Space Oddity by David Bowie, Brown-Eyed Girl by Van Morrison, Still Haven’t Found What I’m Looking For by U2 and Down Under by Men at Work.

Afterwards, Mr Desmond, of York Road, said: “It was excellent to be a part of and nice to be asked. It’s lovely to play in this atmosphere with all the Christmas spirit.”

Snacks were provided by the coffee house, which is run by town councillor Lorraine Hillier, and the performance was in aid of the Sue Ryder hospice at Nettlebed.

On Saturday, Bathroom Acoustics performed for dozens of people from the balcony of Leander Club.

They also performed last year and Mr Gerrard-Wright, who used to live in Albert Road but now lives in Cholsey, told the crowd he still feels like a “Henleyite”.

He said: “We were very pleased to come back, particularly at this iconic venue. I run past it up and down the towpath on a regular basis and it’s the world’s premiere rowing venue so it was a privilege to play here.”

The band played hits including Nine to Five by Dolly Parton, Valerie by The Zutons and Freedom by Wham!

People gathered around small fires in the courtyard, while mulled wine was also handed out.

The show was supported by Brakspear and was raising money for Wyfold Riding for the Disabled.

On Sunday, Phyllis Court Club was packed for a performance by Michael Bublé impersonator Marc Hockley, alias Mike All Bublé.

Wearing a shiny grey suit and speaking with a Canadian accent, he sang some of the crooner’s hits including Christmas (Baby Please Come Home) as well as festive songs such as It’s Beginning to Look a Lot Like Christmas and Walking in a Winter Wonderland.

The Reading singer perched on the edge of the stage to serenade people in the front row and also walked around the audience as he performed. Mr Hockley performed as Robbie Williams at the 2014 calendar when he was outside the town hall.

He said: “This was a lot warmer than the last gig — I was in a tin-foil suit in front of a big light! It was good fun. I’ve done a whole weekend of gigging as the Bublé act is very busy at Christmas.”

Guests were served mulled wine and the performance was raising money for Thames Valley Animal Welfare.

On Monday, about 60 people watched Blues band Ma Bessie and her Pig Foot Band perform on the decking outside the Angel on the Bridge pub.

They played some of their own songs including A Hot Time in Henley Tonight and carols and festive tunes including Silent Night, We Wish You a Merry Christmas, Ding Dong Merrily on High and Santa Claus is Back in Town.

The crowd clapped and sang along with the final number, Down by the Riverside.

The spectators were served turkey and cranberry rolls courtesy of Copas Turkeys.

Mr Rodway said: “I’m really proud we can bring these sort of performers to our little event.

“What I quite liked about it was it was something different — it’s great to have that variety. It’s a new act to the event and we keep finding these gems.”

On Tuesday, a cabaret artist was joined by members of the audience when she performed at Hotel du Vin in New Street.

About 80 people packed into the courtyard, which was decorated with strings of overhead lights.

Ms Hackemann, of Ardler Road, Caversham, who performs as Baroness Maria von Hackemann, opened with Falling in Love Again by Marlene Dietrich, which she sang in both English and German.

She then sang Money Makes The World Go Round, from Cabaret, accompanied on tambourine by Geoff Probert, of St Mark’s Road, Henley.

Her set also included The Masochism Tango by Tom Lehrer and a version of Kiss by Prince, which she adapted with German lyrics.

Ms Hackemann, who is half-
German, told the crowd: “It might be useful to learn some of our language in case you feel like going there after the Brexit vote. We’re taking anyone these days.”

She finished with a Christmas medley featuring Winter Wonderland, Chestnuts Roasting On An Open Fire and Last Christmas.

For this, she was accompanied by Patrick Collins, Elizabeth Landen, 17, and Emerson Proctor, nine.

Ms Hackemann, who also performed in 2014, said afterwards: “It was wonderful — I had so much fun and the audience was so warm and welcoming. I loved being able to bring the audience into it.

“Henley is a wonderful place at Christmas. It’s so beautiful and sparkly and all the small independent retail outlets make it a great place to shop too.

“The Living Advent Calendar is a great idea and I’d love to keep coming back.”

Mr Rodway said the shows so far had been on a par with previous years and in some cases better.

He said: “Having our nights linked with other events in the town like the Christmas Festival has made sure that people come and visit us. There were so many people who came on Friday who hadn’t been before that and we hope for the same on the Christmas shopping night on Sunday.

“People should make sure they don’t miss out on what’s coming up. Those who have been so far will be able to testify that we have had some great performances and some really fun nights and we are going to be having more of the same.”

Tonight’s (Friday) performance will take place at the town hall.

Other sponsors of the calendar include the Head Partnership solicitors, CTC-aspire and Philip Booth. The Henley Business Partnership and Henley Town Council are also supporting it.