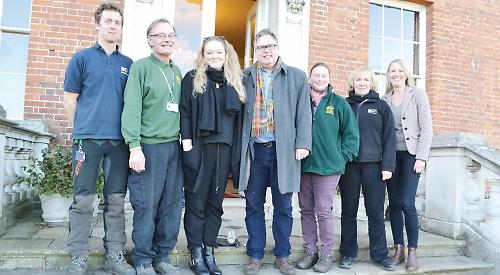 A COMMUNITY feast and a “green” trail will feature in the third annual Chelsea Fringe Henley.

The alternative gardening festival will run across two weeks, rather than three, so it is more “concentrated”, say organisers.

It will run from May 20 to June 4 and will include a new event at the Berkshire College of Agriculture in Burchetts Green, where the 2017 festival was launched last week.

It will begin with an open-air event at Babylon Plants in Cuxham on May 20 and end on June 4 with a floral flotilla on the River Thames in Henley, which has been the opening event in the past two years. The meditative walk at Greys Court will also return.

Chelsea Fringe promotes an inclusive approach to flowers, gardens and gardening and takes place in a number of town and cities around Britain as well as Australia, Japan, Italy and Poland.

The Henley event is organised by Victoria Newton, from Peppard Common, who works at the Garden Museum in London, and Jane Macfarlane Duckworth, who runs the Flower Union in Hambleden.

Festival founder Tim Richardson said: “Henley has been one of the most vibrant of the non-London locations for the fringe. The events that have been held have been absolutely quintessential in that they have been quirky and interesting.

“It’s all down to Jane and Victoria and their energy and commitment and the understanding they had from the get go about what the Chelsea Fringe is about.”

The BCA event on May 21 will focus on its history and its Grade I listed building Hall Place. Amanda Gee, the college’s commercial director, said: “We have got a historical building and things that are of interest. We need to find something that engages the students so they have an experience as part of this. That’s the most important thing.”

She said the college had a Grade II listed statue of Diana, the goddess of hunting, that looked “really weary” and hoped the event could be used to start an appeal to refurbish it.

Barrie Duesbury, the college’s horticultural lecturer, said: “It’s a good idea that we should be involved as it gives the students the opportunity to gain practical, industry skills. I would like to see it happen every year.”

Mrs Newton said: “It’s great to have made a new partnership locally for the fringe. Hopefully it will encourage other organisations to become involved.”

Mr Richardson added: “There’s a new generation of gardeners out there and, of course, the students here are naturally part of that. This allows them to express themselves through the medium of gardens and plants and trees and landscaping in any way they want.

“The point of Chelsea Fringe is the imagination and the ideas behind the project. You don’t have to spend money to make really good projects.”

Chelsea Fringe runs alongside the Chelsea Flower Show and is endorsed by the Royal Horticultural Society.