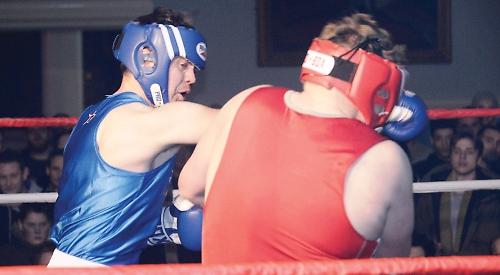 A CHARITY worker took part in a boxing tournament to raise funds — and ended up with a shiner.

Josh Smith was one of 10 amateurs who stepped into the ring at the event at Henley town hall, watched by a crowd of more than 150 people.

The 27-year-old former personal trainer fought three two-minute rounds against Oscar Woodbridge, from Twyford, and lost by just a single point, 29 to 28.

He suffered a black eye after being punched in the same spot where he had suffered the same fate in training a few weeks beforehand.

The event was in aid of Henley youth and community project Nomad, which he joined as a support worker last year.

Mr Smith and several of his fellow fighters had not boxed before so they went through a 10-week training programme by Twyford Boxing Club.

On the night, each bout began with the boxers climbing into the ring accompanied by elaborate lighting and rousing music including Can’t Stop by the Red Hot Chili Peppers and Smells Like Teen Spirit by Nirvana.

The crowd cheered as the boxers threw their punches and applauded at the end of every round, each of which was interspersed with a one-minute break.

The fighters were scored on their dominance in the ring and the number of punches they landed.

Mr Smith, a former manager for the Virgin Active gym chain, agreed to take part after helping the club run a smaller event in September.

He said: “They told me they needed more participants, so I thought, ‘why not?’ The boxing club has done a lot for us and I thought it would be a great way to strengthen the ties between us.”

“It was great,” he said. “Boxing’s like nothing I’ve ever done before. The toughest thing is the sheer endurance you need and to start with I was totally out of breath after one round.

“However, the club had a great way of teaching so I picked it up quickly. We covered footwork and throwing punches and did lots of pad work with partners. It was tiring but very rewarding. On the night, I was very nervous, especially knowing that I had friends and family in the audience.

“It helped that I was fighting with a great group of people — we all got along and had fun.

“Those three rounds were probably the longest six minutes of my life. Two minutes isn’t a long time but when you’re up there it feels like ages.

“I knew I’d lost the second and third rounds but I was just hoping to get through it and have a close fight, which I did. I’m naturally competitive so I’m a bit disappointed to lose but Oscar’s win was well-earned.”

Mr Smith, who lives in Reading and plays for the Berkshire Renegades American football team, added: “I was pretty sore the next day, which is to be expected, but I was very grateful that I was allowed to take the morning off!”

Tim Prior, youth and family team manager for Nomad, which is based at the d:two centre in Market Place, said: “Josh deserves a lot of credit as it takes guts to step into that ring and not everyone has that courage.

“There’s no way I would have done it!”

Organisers hope to at least match the £3,000 raised at an identical event last year.

Mr Prior said: “All in all, it was a fantastic evening with a great atmosphere. Everyone seemed to really enjoy themselves.

“It’s quite expensive to stage but it’s great value because the whole set-up is incredibly professional and has a real ‘wow’ factor.”

Nomad advisory board member and Henley businessman Chris Ward came up with the idea last year as he had previously trained with Simon Teague, the boxing club’s joint owner.

Mr Teague said: “All the boxers did incredibly well considering that they were amateurs. They had an amazing experience and we’re really proud of them.”

It’s hoped the tournament will be held for a third time next year.