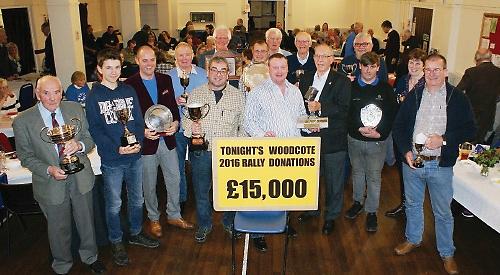 FORTY charities and community groups have received a share of the proceeds from this year’s Woodcote Rally.

The event, which took place on July 9 and 10, was attended by thousands of people and raised £15,000, a slight decrease on last year.

It brings the total donations since the Woodcote Charitable Association first held the rally in 1964 to £456,500.

Cheques were handed over during a ceremony at Woodcote village hall on Friday when prizes were awarded to the winners in each of the rally’s classes.

The largest donation was £850 to Wallingford’s army cadets, who were among 19 local organisations that helped with the running of the event.

The youth club will put the money towards activities for its visitors while St Peter’s will put its grant into its organ fund.

The library group’s donation will go towards new books while Woodcote Primary School will put its money towards a new learning and play area. The village green committee will replace several trees and Mowforth House will buy Christmas lunch for its residents at the Highwayman in Exlade Street.

Spokesman Andy Crockett said: “It has been another good year for us as £15,000 is a lot of money to give away to charities and good causes.

“It’s rewarding to see how our efforts and hard work have paid off.

“We’re looking forward to next year and although it’s too soon to say what attractions will be there, we’re always keen to get more volunteers and marshalls as we could do with some new blood.”

l Next year’s rally will be held on Saturday and Sunday, July 8 and 9. Anyone who can help should email marshalls@woodcoterally.org.uk