Beginner's luck for novice gardener as he wins award 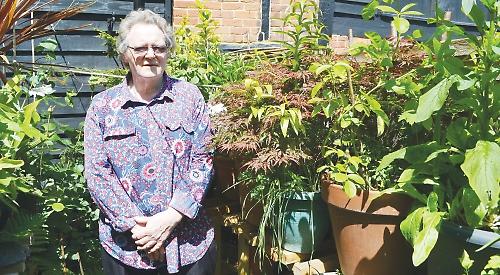 THE winner of Henley’s best garden award has revealed he doesn’t even know the names of half the plants he grows.

Keith Thatcher only took up gardening two years ago after the death of his mother Margerie when he had more time to spend in the back garden at his home in Market Place.

The courtyard garden consists mainly of plants in pots, with one flower bed, but he has built stages to create multiple levels of colours featuring clematis, honeysuckle, jasmine and hebes, among other plants.

The judges from Henley in Bloom liked it so much that they not only named it the best back garden out of 17 entries but also the best overall in the annual Gardens of Henley Awards.

“I’m not such a keen gardener that I know all the names of the plants. I try to keep them labelled to help me find out more about them.

“I used to live with my mother until she died two years ago so gardening helps give me something to do in the summer months for a couple of hours a day.

“I’m retired so I decided to tidy the garden up as I was having problems with rats on the floor.

“I had to dig it out and build the staging. Now if there are rats running around, they have nowhere to hide.

“It’s still a work in progress. I’m repotting some of the plants in bigger pots and working on some of the bits on the ground. I’m just trying to maintain it but if I see any plants I like I will buy them to add to it.”

Town councillor and Henley in Bloom committee member David Eggleton, who was one of the four judges, said: “All the gardens were fantastic and it was very close between the top two. We felt Mr Thatcher’s garden best fitted our criteria with environmentally friendly plants and the way it was laid out.”

Mr Thatcher was among the prize-winners at the awards ceremony held at the town hall on Wednesday evening last week.

They were all presented with certificates and prizes and their gardens were ranked either gold, silver gilt or silver, which is how Britain in Bloom entries are marked.

The awards, which are held in conjunction with the Henley Allotments Association, were presented by singer Vince Hill, from Shiplake, Mayor Kellie Hinton, who chairs Henley in Bloom, Councillor Eggleton and Steve Hull, of Southern Plant, which sponsors the awards.

Cllr Eggleton’s parents, Chris and Ann, of Gainsborough Crescent, were awarded gold for both their front and back gardens.

The couple were also presented with silver in the community garden category on behalf of the 60+ Club in Greys Road car park, where they are part of a group of members who look after the maintenance.

Mr Eggleton also won the prize for best plot at the Greencroft allotments in Matson Drive.

Dave McEwen, chairman of the allotments association, said: “I don’t know how he does it with all the other gardens he is looking after!”

Cllr Hinton said Mr Bartle went “above and beyond” his work on behalf of the community.

The Gardening Buddy of the year was Di Rook, of Deanfield Avenue.

She was chosen by Elizabeth Hodgkin, a former mayor and chairman of Henley in Bloom, who leads the volunteer gardening group.

Mrs Hodgkin was unable to attend the ceremony but in a message read out by Cllr Hinton and Mr Hill, she said: “Our buddy of the year has only just joined us, although she is no stranger to us and is very keen on wildlife protection and was able to help us with the Trinity wildlife garden and the Henley Wildlife Group. She has become a regular and is now a keen and eager part of the group and very good company.”

Bowling Court, a retirement housing complex off Fair Mile, was awarded silver gilt in the community garden category, which was presented to Martin Curtis, who is the professional gardener there. The “on the spot” award for best front garden not entered in the competition was awarded to Jean and Peter Smart, of Elizabeth Road.

The other judges in the gardens awards were Henley in Bloom committee members Caroline Langer and Sara Abey and town councillor Sarah Miller.

In the allotments awards, the winner of the best plot at Watermans allotments was Mick Blackall for the second year in a row.

Mr McEwen presented the association’s community award to Ken Henley, of The Close, and Peter Shephard, of Western Avenue, for their volunteer work at the allotments, where they help out all year.

Mr McEwen said: “This is a special award for two special people. They are not plot-holders but enjoying going down to the allotments and spending time in the fresh air, cutting the grass and clearing up rubbish. They do it because they enjoy it and the good company they get.”

The allotments awards were judged by the managers Doug Richards and Lewis Every.