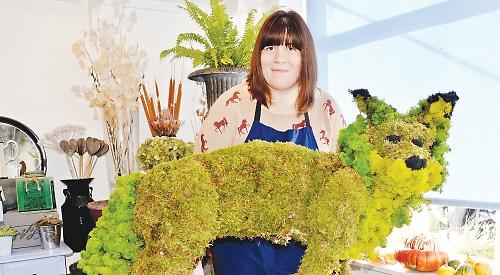 A GIRL of three received a prize worth £100 after winning a competition to name a fox made from different types of moss.

The sculpture was created by Alice Deering, who works at the Bluebells florists shop in Reading Read, Henley, where it went on display.

Customers were asked to suggest a name and all the entries were put into a draw, which was drawn by Mrs Deering and Molly Grimes, who runs the business with her daughter Amy Bryant.

The winner was Alice Hughes, from Henley, who suggested “Coco”. She returned to the shop with her mother Lizzie and sister Florence, eight, to claim her prize of fresh flowers, bulbs, gourds, scented candles and miniature glass vases.

Mrs Hughes, who is a regular customer at Bluebells, said: “Alice just loves the name Coco so we put it forward. She has never won anything this big before and was very excited.

“It’s a really lovely prize as it also contains things which the children can plant in the garden, which is a nice touch.”

Mrs Deering created Coco using a “skeleton” made of chicken wire and “fur” made with ordinary moss. The eyes, face and tail were made using different shades of reindeer moss, a type of lichen with a fluffier texture.

Mrs Deering said: “Lots of people came forward with all kinds of different names and we were very pleased to announce Lizzie and her family as the winner.

“We had a fantastic response to the competition and will definitely do something like it again.”