Five decades of hard work pays off for keen gardener 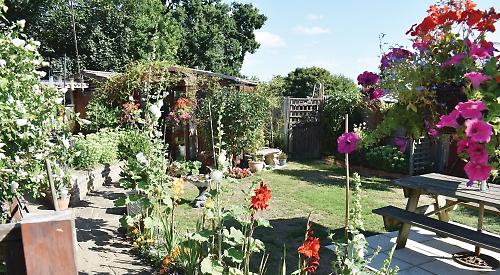 A MAN who spent decades improving his garden has won an award for his efforts.

The judges praised the variety of plants in his back garden and the different areas.

Mr Ellery, who has lived at the property with his wife Sylvia, 75, for 51 years, was encouraged to enter the competition by his family — the couple have six children and more than a dozen grandchildren and great-grandchildren who regularly visit them.

The garden has scores of different plants, several seating areas and patios, a fish pond and some greenhouses for growing new plants. The couple also keep chickens.

Mr Ellery, who worked in the building trade before retiring, said: “It has taken years to create. When we moved in it was just a huge vegetable patch.

“We have had a lot of different ideas, like the patio areas where you can sit. I spend most of my time in the garden and my grandsons and other family members come over to help me look after it.

“I was surprised to win the best garden. The judges mentioned how much they liked all the different areas and the hanging baskets.

“I like to sit here and just enjoy it. I could just sit and look at it but I like to look after the fish and birds as well. We grow a lot of our own plants and buy some as well. The garden is for us but gives us somewhere to bring the family together.”

Mrs Ellery, who worked in nursing, added: “Ours is a big family and they all come round and say how lovely the garden is.”

They were looking for people who take pride in their garden, help the overall look of the estate and encourage community involvement.

Gardens were judged on their design and appearance, the choice of plants, cleanliness, lack of weeds, attractiveness to wildlife, water conservation and environmentally friendly initiatives.

Each garden was given a classification of either establishing, improving, developing, thriving or outstanding.

The judges marked the Ellerys’ garden as outstanding.

They said: “It is truly stunning. It is a pleasure to look round and there was something new around every corner.

“It was clear that an enormous amount of work goes into this garden and there was just so much variety. A beautiful garden.”

Mr Ellery was presented with a certificate and vouchers for Toad Hall garden centre by Mr Eggleton and Mrs Isaac at Henley town hall.

Mrs Isaac said: “We are always trying to come up with ideas to promote and engage our lovely community at Gainsborough and we felt a garden competition would be lovely.

“We loved every garden we saw and were blown away by the level of dedication put into each one.”

The front garden classifications were as follows:

The back garden classifications were: