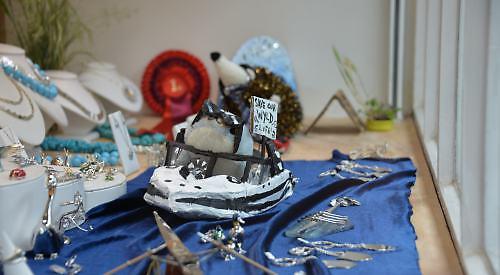 A TOY hedgehog waterskiing stole the hearts of the judges for this year’s Henley regatta window display competition.

It was part of the display in the window of Lawsons Goldsmiths in Duke Street, which was awarded the top prize of £125.

The runner-up was fellow Duke Street jewellers David Roger Sharp, which won £100, while third was the Cecilia Quinn Shoe Boutique in Hart Street (£75) and fourth was Jods Galore in Bell Street (£50). All four also received a bottle of champagne.

The theme was the “riverbanks of Henley as a habitat for wildlife” and entrants had to incorporate a nature theme in their display with extra points being awarded for regatta-themed toy hedgehogs supplied by Carolyn Molyneux, of Delegate Office and Conference Services, of Hart Street, who organises the competition.

Each window also had to feature the trade or profession of the business.  The Lawsons’ display featured silver miniature swans and ducks on a blue cloth representing the River Thames and the hedgehog waterskiing on cardboard skis behind a model boat with a sign that read: “Save Our Wyld Life”.

There were also silver models of other wildlife, such as deer, rabbits, pheasants, foxes and butterflies as well as silver rowing boats.

Simon Lawson. who owns Lawsons, said: “I’m very pleased. There was a lot of effort that went into the display. The judges liked it because of the variety. It was a fun display.”

Lucy Riveiros, who works at the shop, added: “It’s good because it encourages people to think about wildlife and how we need to look after it because it’s not going to be around forever if we do not recycle and protect our environment.” Mrs Molyneux said: “It was excellent. They used their products as best as they could and worked to the theme.”

The other entrants were the Thames Hospice, Helen and Douglas House and Oxfam shops in Duke Street, Candela Clinical Hypnosis and the Kiln Cafe, both in Reading Road, White Garden and Cannell, both in Hart Street, and Anthony Paul Jewellery in Bell Street.