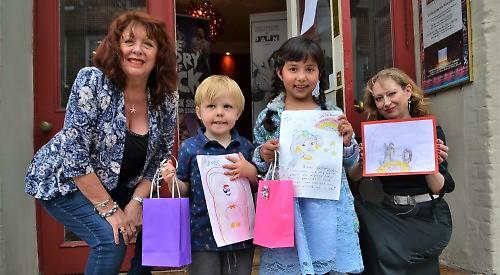 THE winners of a children’s art competition organised by the Kenton Theatre in Henley have been announced.

The New Street venue, which has been shut since the country went into lockdown on March 23, challenged youngsters to draw and colour pictures incorporating the themes of Disney characters and support for frontline workers during the coronavirus outbreak.

Jessica Dingle, seven, of Luker Avenue in Henley, came first with a drawing of Princess Jasmine from Aladdin along with her quote: “Sometimes we only see how people are different from us. But if you look hard though, you can see how much we’re all alike.” She attends Sacred Heart Catholic Primary School and depicted the princess looking at the stars while thinking of a rainbow, the symbol of thanks for the NHS during the crisis.

Jessica’s mother Victoria said: “She loves the film — it’s her favourite and we even watched it before we came out today. She loves drawing and you should see our house as it’s covered in her artwork. I’m thrilled for her to have won.”

Jessica said: “I like Jasmine because she’s a princess and Aladdin is my favourite Disney film because the Genie is in it.”

She was presented with a £10 book token, a Kinder egg and a drawing set. The last two were also given to runners-up James Robinson, four, of Western Avenue in Henley, and Olivia Watson, eight, of Woodlands Road near Harpsden.

James, who attends Sacred Heart Pre-School, drew Forky from Toy Story 4 standing under a rainbow while Olivia drew the famous scene from Lady and the Tramp.

Theatre trustee Julie Huntington said: “The children have taken the brief very well and we were impressed with the standard of entries. The theatre was looking very sad and this was a great way to improve it while engaging the community. It’s free, simple and fun and it’s been a great hit as it has helped to keep children busy.”

All entries are on display outside the theatre for a month.

• The competition will continue next month and the theme is Henley Royal Regatta and pieces should again incorporate rainbows and thank-you messages. Entries should be posted through the theatre doors with name, age and contact details on the reverse.