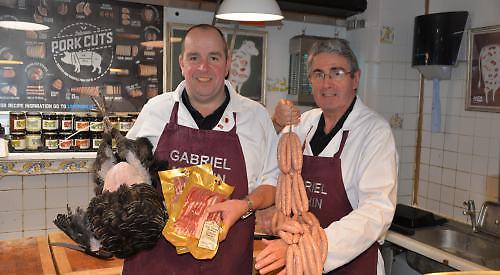 HERE’S your chance to win the biggest and best part of your Christmas dinner.

This week the Henley Standard has teamed up with the town’s award-winning butchers Gabriel Machin to offer the chance to win a 6kg Christmas turkey together with a range of traditional trimmings.

The trimmings are 24 chipolatas, 24 rashers of bacon, a 200g jar of goose fat and a 250g jar of cranberry sauce. The prize has a total value of £90. Based in Market Place, Gabriel Machin has been running since the late 19th century and as well as meat sells game and fresh fish.

Since 2015 it has been owned by Barry Wagner who took over from Ian Blandford, who had run the business for 14 years.

Machin’s turkeys are so popular that people queue outside the shop to collect their orders every year.

The turkeys come from Starveall Farm in Upton, while Machin’s geese are from Peach Croft Farm in Abingdon.

To be in with a chance of winning the turkey, simply answer the following question:

Q. In what year did Barry Wagner take over the running of Gabriel Machin?

Send your answer, along with your name, address and daytime telephone number, to: Turkey competition, Henley Standard, 1 Station Road, Henley, RG9 1AD. The winner will be the sender of the first correct entry to be selected at random after the closing date of Friday, November 15, and will be notified by phone.

The prize is non-refundable and there is no cash alternative. The editor’s decision is final.