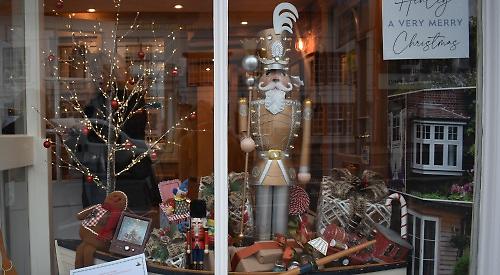 Timber Windows in Hart Street was one of more than 25 businesses judged for this year’s contest, which had the theme of “Christmas in Henley”.

The business has only been open for a year so this was the first time that it had taken part.

The winning display featured a golden nutcracker figurine on a boat full of gifts and was designed by the shop’s marketing team.

“They did a fantastic job — it’s very Christmassy,” said Lynette Tweedy, a showroom assistant at the store. “I wanted the boat and the river because we’re right next to the River Thames.” The Helen & Douglas House charity shop in Duke Street, which won the competition last year, was runner-up with its winter wonderland display.

Assistant manager Rachel Bunt, who created the display with volunteer Gay Peel, said: “It was just a little bit of a hobby during lockdown.

“We were a bit unsure about whether to take part this year but we thought it would be nice for the kids coming home from school to look at.”

Coffee shop Harris + Hoole in Hart Street came third with its dispay of bags from other shops.

Manager Tami Rooke said: “I put together the display on two or three evenings after work. I spent a day contacting all the shops to get their bags while they were shut during lockdown.” Fourth place went to Wild & Rust, a wellbeing and home decor shop in Duke Street for its kindness and sustainability display.

Co-owner Bea Pearson said it was lovely to be recognised for the display, which was designed by her co-owner Nicki Barley.

She said: “Our window is about what is important to us — something that resembles our ethos, which is sustainability.”

Special mentions went to the Henley Larder in Bell Street, which opened last month, and the Kiln Ceramic Café in Reading Road.

The top three won a cash prize, certificate and bottle of Prosecco. The winner also received a trophy.

Mayor Ken Arlett, who helped judge the displays with his wife Dorothy, said: “It was difficult to choose a winner and any one of the businesses could have won.

“People obviously had more time to decorate this year due to the lockdown and dare I say that’s the only positive thing to come from coronavirus?

“All the judges chose a different number one but we did it by a points system and Timber Windows won by one point. It was that close.

“We want to thank them all for taking part and we hope it works out in their favour.”

The other judges were Richard Rodway, a partner at the Head Partnership solicitors, Carolyn Molyneux, proprietor of Delegate Office and Conference Services, and Helen Barnett, the town and community manager.