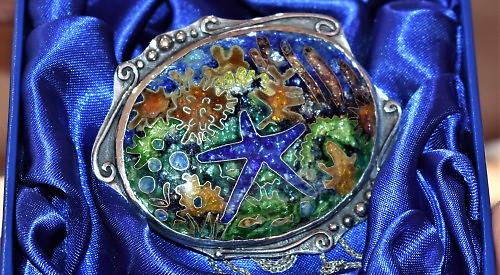 THE winner of a piece of jewellery created to raise money for a marine conservation charity says she will sell it on for the same cause.

Angelina Jones was presented with the bespoke pendant by its creator Lucy Riveiros, manager of Lawsons Goldsmiths in Duke Street, Henley.

It is made of enamel glass and sterling silver and has an 18in chain but can also be worn as a brooch. It depicts coral reefs, a starfish and sea plants in a mixture of blue, green and gold. Miss Riveiros spent three weeks making it and gave it away in a raffle to help Sea Shepherd UK, which aims to prevent the destruction of ocean habitats and wildlife, and raised £230.

Miss Jones, of Greys Road, Henley, is a keen environmentalist and
co-ordinator of the Henley Toad Patrol, and hopes to boost the total by selling her prize.

She said: “It’s beautiful but I’m very heavy-handed and tend to lose things anyway so I’d prefer the charity to benefit. It will make a lovely present so I’m sure someone will take an interest.”

Miss Riveiros said: “We were very pleased with the initial response to our raffle as we’d only expected to raise about £100 and it has also drawn attention to the work of Sea Shepherd. We’re really pleased that Angelina is selling it on because it’s such a good cause.”

If you are interested in buying it, email amtjones@googlemail.com